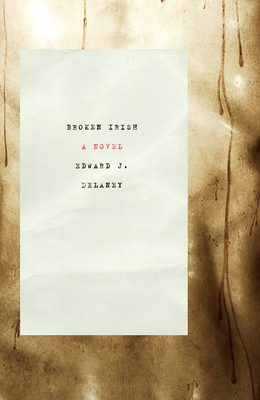 Epic in its scope but relentlessly compelling in its storytelling--not a common combination--Broken Irish is a splendidly readable and richly textured novel. Edward J. Delaney is an enormously gifted writer. --Robert Olen Butler, author of A Good Scent from a Strange Mountain and Perfume River

Truly indelible. . . . Delaney] cares about details and understands their importance to the larger themes of loss, desperation, and betrayed loyalties. His characters are not merely vehicles for ideas, but rather fully realized, familiar people, whose failures are heartbreakingly authentic. --Boston Globe

As the millennium approaches, Southie is still a place where little distinguishes mob bosses from pillars of industry, the bullied from the bullies, and the pious from the pitiful. In this tough Boston neighborhood, six lives are about to converge: Jimmy, an alcoholic writer, whose life is unalterably changed after witnessing an accident; Jeanmarie, a teenage runaway, whose quest for independence leads down a dark path; Christopher, a young Catholic school dropout with a gnawing secret; Colleen, a war widow whose grief has blinded her to the needs of her son; Father John, a priest on the eve of forced retirement; and Rafferty, a wealthy businessman who hires a ghostwriter to tell his story.

In Broken Irish, Delaney trains his journalist's ear, his filmmaker's eye, and his writer's heart on each of their stories--creating a driven and deeply human narrative that pierces the core of the American experience. He also gives us a captivating portrait of South Boston in the late-1990s--a time when Whitey Bulger has evaporated into the ether but his boys still kick around on the street corners . . . waiting for Whitey's Second Coming.

Edward J. Delaney is an award-winning journalist, filmmaker, and author of four works of fiction, including Follow the Sun and Broken Irish, both published by Turtle Point Press. He lives and teaches in Rhode Island.

Truly indelible. . . . [Delaney] cares about details and understands their importance to the larger themes of loss, desperation, and betrayed loyalties. His characters are not merely vehicles for ideas, but rather fully realized, familiar people, whose failures are heartbreakingly authentic.” Boston Globe

In an artfully constructed story . . . Delaney tackles corporate corruption, the sex-abuse scandal in the Catholic Church, gun violence, and, especially, alcoholism (in searing passages on the ravages of drink that recall Malcolm Lowry’s Under the Volcano).” Booklist (starred review)

Readers will be captivated. The author continues to demonstrate great dexterity and storytelling acumen in his lyrical page-turner.” Publishers Weekly (starred review)

Delaney plots his narrative through parallel story lines, all of which elegantly converge at the end of the novel. . . . [keeping] the incipient tragedy beautifully and heartbreakingly balanced.” Kirkus Reviews (starred review)

Muscular and taut . . . a great story that reaches into a reader’s life [and] poses important questions about people, fate and community.” Shelf Awareness for Readers

If you're anything like me, you Will. Not. Be. Able. To. Stop. Reading.” The Quivering Pen

Edward J. Delaney is an award-winning author, journalist, and filmmaker. His books include the novels Follow the Sun, Broken Irish, and Warp & Weft, and the short story collection The Drowning and Other Stories. His short fiction has also been published in the Atlantic and Best American Short Stories, and featured on PRI's Selected Shorts program. Among other honors, he has received the PEN/New England Award, O. Henry Prize, and a National Endowment for the Arts Fellowship. He is also the co-author of Born to Play, by Boston Red Sox second baseman Dustin Pedroia. As a journalist, Delaney has written for publications including the Denver Post and Chicago Tribune, received the National Education Reporting Award, and has served as an editor at the Neiman Journalism Lab at Harvard University. As a filmmaker, he has directed and produced documentary films including The Times Were Never So Bad: The Life of Andre Dubus and Library of the Early Mind.Born and raised in Massachusetts, Delaney has also spent time in Georgia, Florida, and Colorado, and now lives in Rhode Island, where he teaches at Roger Williams University and edits the literary journal Mount Hope.
Loading...
or support indie stores by buying on