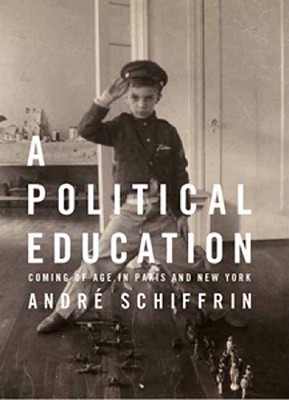 Coming of Age in Paris and New York


André Schiffrin was born the son of one of France’s most esteemed publishers, in a world peopled by some of the day’s leading writers and intellectuals, such as André Gide, Jean-Paul Sartre, and Antoine de Saint-Exupéry. But this world was torn apart when the Nazis marched into Paris on young André’s fifth birthday.

Beginning with the family’s dramatic escape to Casablanca—thanks to the help of the legendary Varian Fry—and eventually New York, A Political Education recounts the surprising twists and turns of a life that saw Schiffrin become, himself, one of the world’s most respected publishers. Emerging from the émigré community of wartime New York (a community that included his father’s friends Hannah Arendt and Helen and Kurt Wolff), he would go on to develop an insatiable appetite for literature and politics: heading a national student group he renamed the Students for a Democratic Society—the SDS . . . leading student groups at European conferences, once, as an unwitting front man for the CIA . . . and eventually being appointed by Random House chief Bennett Cerf to head the very imprint cofounded by his father—Pantheon.

There, he would discover and publish some of the world’s leading writers, including Noam Chomsky, Michel Foucault, Art Spiegelman, Studs Terkel, and Marguerite Duras.

But in a move that would make headlines, Schiffrin would ultimately rebel at corporate ownership and form his own publishing house—The New Press—where he would go on to set a new standard for independent publishing. A Political Education is a fascinating intellectual memoir that tells not only the story of a unique and important figure, but of the tumultuous political times that shaped him.

Praise For A Political Education: Coming of Age in Paris and New York…

“André Schiffrin’s memoir begins and ends in Paris, neatly encircling a long career as a titan of publishing in New York City, where he managed Pantheon Books for 30 years. An introspective wish to explore his ‘dual nature’ has led him to compose a narrative of fractured halves: of French and American loyalties, of personal history and political opinion and—perhaps most significant—of a father and a son gesturing to each other across death’s divide.” —Los Angeles Times

“[A Political Education’s] real strength is in its depiction of a childhood that included attending a Quaker school in New York City and growing up with parents displaced from Europe yet deeply connected to it.” —Elizabeth Taylor, Chicago Tribune

“A beautifully written and melancholy update, if you will, of Democracy in America by the Frenchman de Tocqueville, this book was also written by a man born in France, but one who has spent most of his life in America, most famously as a publisher of books in support of peace and we the people.” —Kurt Vonnegut

“Schiffrin’s memoir is a master class in living, learning, and writing. Sign up now for a fabulous experience.” —Bill Moyers

“This remarkable work is more than a flesh-and-blood tale of growing up. It is the stunning and revelatory road map of a seeker. It is an autobiography of ideas.” —Studs Terkel

“André Schiffrin’s life story is a riveting journey, from the ‘commanding heights’ of American culture in the 1940s through the culture crash of the Reagan-Bush era. Along the way we meet the ‘great and the good’—heroes like André Gide, who really cared about freedom, as well as villains who just didn’t give a damn. This is the best literary and political memoir I’ve read in years—an indispensable text for understanding what we’ve lost.” —John R. MacArthur

“The sinewy memoir of a natural child of high European culture as well as a shrewd brief for unblinkering ourselves from fashion and cant . . . From the start, Schiffrin breathed politics and ideas.” —John Leonard, Harper’s Magazine

“Schiffrin’s coming-of-age story acts as a springboard for a series of vivid and insightful vignettes about political developments in the United States . . . Poignant memoirs.” —Bookforum

“Seamlessly weaves his own life story into an overview of the political climate in the United States and Europe from World War II to the present, and demonstrates the chilling effect that the McCarthy era had on freedom of expression in the U.S.” —Jewish Book World

“Impressive . . . In a time when pliable corporate managers have the final say, Schiffrin writes as an intellectual representative of lost times and attitudes, vehemently defending the importance of independent publishers.” —Frankfurter Allgemeine Zeitung

“Exciting . . . A look back on the global evolution of a profession. From his father he inherited the belief that money is used to make beautiful books and spread great ideas, but he suddenly discovered that, in the world in which we live, money is now used to produce money.” —Le Nouvel Observateur

“Exciting descriptions of fleeing France with his parents . . . and evocative descriptions of postwar America . . . Everything vibrates in the sensitivity of a young eye.” —Libération

“A fascinating half-century history of life in the United States.” —Le Monde

For thirty years, Andre Schiffrin (1935-2013) was the publisher of Pantheon Books, where he showcased some of the world's leading writers, including Noam Chomsky, Michel Foucault, Eric Hobsbawm, Art Spiegelman, Simone de Beauvoir, Studs Terkel, and Marguerite Duras. In 1990, he left Pantheon to found The New Press, and many of those writers went with him. He was the author of an acclaimed study of the book industry, "The Business of Books: How International Conglomerates Took Over Publishing and Changed the Way We Read"--which was published in twenty-three foreign editions--and" Words & Money."
Loading...
or
Not Currently Available for Direct Purchase