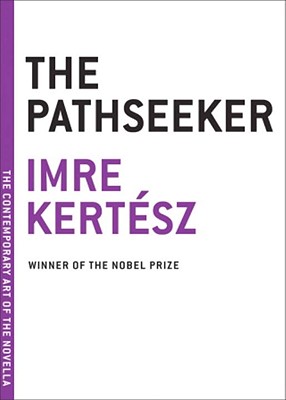 The Pathseeker (The Contemporary Art of the Novella)

"There's no such thing as chance...only injustice."

From the winner of the Nobel Prize for Literature for “writing that upholds the fragile experience of the individual against the barbaric arbitrariness of history..."

The acclaimed Hungarian Holocaust survivor Imre Kertész continues his investigation of the malignant methodologies of totalitarianism in a major work of fiction.

In a mysterious middle–European country, a man identified only as “the commissioner” undertakes what seems to be a banal trip to a nondescript town with his wife—a brief detour on the way to a holiday at the seaside—that turns into something ominous. Something terrible has happened in the town, something that no one wants to discuss. With his wife watching on fearfully, he commences a perverse investigation, rudely interrogating the locals, inspecting a local landmark with a frightening intensity, traveling to an outlying factory where he confronts the proprietors ... and slowly revealing a past he's been trying to suppress.

In a limpid translation by Tim Wilkinson, this haunting tale lays bare an emotional and psychological landscape ravaged by totalitarianism in one of Kertsz's most devastating examinations of the responsibilities of and for the Holocaust.

Praise For The Pathseeker (The Contemporary Art of the Novella)…

“Kertész's work is a profound meditation on the great and enduring themes of love, death and the problem of evil, although for Kertész, it's not evil that is the problem but good.”
—John Banville, author of The Sea

“From Imre Kertész, the winner of the 2002 Nobel Prize for Literature, we have come to expect novels where [his] detectives track themselves, seeking to apprehend their own role in ‘the logic’ of authoritarianism. . . . From a recipe with these ingredients, it is hard to imagine anything but the highest seriousness. The Pathseeker doesn’t disappoint. . . . Kafka comes to mind.”
—John Leonard, Harper’s Magazine

“Original and chilling.”
—The New York Review of Books

“The Pathseeker is a necessary addition to Mr. Kertész’s work in English, and should occasion thanks to both the novelist and his translator, Tim Wilkinson, who has rendered Mr. Kertész’s (famously difficult) Hungarian into a flowing, able English—as well as to Melville House’s fascinating ‘The Contemporary Art of the Novella’ series, which rubric The Pathseeker falls under. . . . And with the introduction of The Pathseeker into English, after 30 years of silence, we should pay grateful and careful attention.”
—New York Sun

"[A] profound and puzzling novella... Kertész reminds us that some things can never be named."
—Los Angeles Times

"A wonderful opportunity to deepen our understanding of Kertész."
—The Nation

Imre Kertesz was born in Budapest in 1929. At age 15 he was deported to Auschwitz, then Buchenwald, and finally to a subcamp at Zeitz, to labor in a factory where Nazi scientists were trying to convert coal into motor fuel. Upon liberation in 1945 he worked as a journalist before being fired for not adhering to the Communist party doctrine. After a brief service in the Hungarian Army, he devoted himself to writing, although as a dissident he was forced to live under Spartan circumstances. Nonetheless he stayed in Hungary after the failed 1956 uprising, continuing to write plays and fiction in near–anonymity and supporting himself by translating from the German writers such as Joseph Roth, Freud, Nietzsche, and Wittgenstein. He remained little–known until 1975, when he published his first book, Fatelesseness, a novel about a teenage boy sent to a concentration camp. It became the first book of a trilogy that eventually included The Failure and Kaddish for an Unborn Child. Subsequent titles include Liquidation, Union Jack, and, most recently, a memoir, The File on K. In 2002, Kertesz was awarded the Nobel Prize for Literature. He lives in Budapest and Berlin.

Tim Wilkinson is the primary English translator of Imre Kertesz as well as numerous other significant works of Hungarian history and literature. In 2005, his translation of Kertesz's Fatelessness was awarded the PEN Club/Book of the Month Club Translation Prize. He lives in London.
Loading...
or
Not Currently Available for Direct Purchase