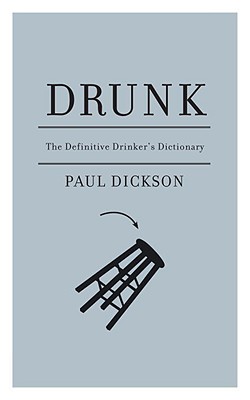 Here it is: from a Guinness World Records holder, the most English synonyms ever recorded for a single word—“drunk.”

Wise-guy lexicographer Paul Dickson, a consulting editor at Merriam-Webster, has long held the record for collecting the "Most Synonyms" for any term in the English language. He made the Guinness Book of World Records with 2,231 terms meaning "drunk"–beating out no less than Benjamin Franklin, who published his own list (The Drinker's Dictionary) in 1736. But records are made to be broken . . . .

Enter Drunk, wherein Dickson breaks his own record with 2,964 terms for tipsy: blitzed, roasted, on the sauce, whazood, whiskey frisky, and Boris Yelstinned.

An introduction puts the list into context: Why are there so many synonyms for "drunk" and how did Dickson get to collecting them? Dickson's wacky terms are annotated, too, and lushly illustrated, explaining the twist and turns of a language that has thousands of ways to describe somebody who is two sheets to the wind. How, for example, does a word like "blotto" go from the lips of P.G. Wodehouse, into the writings of Edmund Wilson, before landing with Otto from The Simpsons ("My name is Otto, I like to get blotto").

It's a terrific exploration of language and a meditation on drinking culture throughout the ages.

"Where else could we learn that 30 years after the term plastered entered the drunk lexicon, the Arizona Lath and Plaster Institute would protest the use of the term?"
—Carolyn Kellogg, Los Angeles Times

"Is it a worthy book for anybody who likes food or wine (or beer or cocktails)? Absolutely. Because reading through these definitions, accompanied by Brian Rea’s charming drawings, is so immensely pleasurable that it’s intoxicating. Just like the title suggests."
—Time Out Chicago

“Dickson has done it again, entrancing those who want to eavesdrop on the slanguage of everyone from barista to bitheads.”
—Erin McKean, American lexicographer and editor of Verbatim: The Language Quarterly

“With focus, a passion for language, and a world-class ear, Dickson has produced brilliant chapter after brilliant chapter, any one of which would be a lifetime achievement for most lexicographers.”
—Tom Dalzell, senior editor of The New Partridge Dictionary of Slang and Unconventional English

Paul Dickson is the author of more than 45 nonfiction books and hundreds of magazine articles. Although he has written on a variety of subjects from ice cream to kite flying to electronic warfare, he now concentrates on writing about the American language, baseball, and 20th century history. His most recent titles include The Dickson Baseball Dictionary, Sputnik: The Shock of the Century, and Slang: A Topical Dictionary of Americanisms.