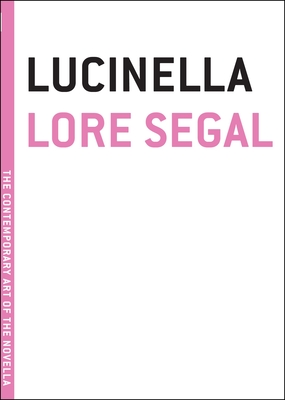 Lucinella (The Contemporary Art of the Novella)

Intelligence turns me on.

Lore Segal's tour de force look at the New York literary scene was a hit when it was first released in the 1970s, winning the praise of the literary elite. John Garnder called it “magical.” William Gass said it was “witty, elegant, beautiful.” Stanley Elkin called it “a shamelessly wonderful novel, so flawless one feels civilized reading it.”

It's been a cult classic ever since, and appears here in its full, original text, as fresh as ever: the story of the whimsical New York poet Lucinella and her adventures among the literati. It starts at Yaddo writers colony, where life is idyllic, meals are served to you in your rooms, and cocktails are ready at day's end … and still the writers complain and compete. Then it moves back to New York City, where the pampered once again face reality, and wonder: Will a different husband … or the right publisher … or the perfect filing system … put life in order?

Lucinella and her circle feel lacking and keep looking, busily going to parties and watching one another 's lives closely for signs of happiness, love and despair.
Segal depicts it all with a perfect blend of love and malice. And at the center is Lucinella herself, so full of humanity and frailty that these divertissements do her to death. “Here,” as Cynthia Ozick says, “is the enchanted microcosm, the laughter of mortality.”

The Contemporary Art of the Novella series is designed to highlight work by major authors from around the world. In most instances, as with Imre Kertész, it showcases work never before published; in others, books are reprised that should never have gone out of print. It is intended that the series feature many well-known authors and some exciting new discoveries. And as with the original series, The Art of the Novella, each book is a beautifully packaged and inexpensive volume meant to celebrate the form and its practitioners.

Praise For Lucinella (The Contemporary Art of the Novella)…

"[An] unusual, original, poetic, simple, complicated, baffling, probing, erudite, allusive, illusive, down-to-earth, up-to-heaven novel. It might suffice to call it a novel novel. One can be sure that Lore Segal is no ordinary writer. She can give imagination, unexpectedness, and beauty to the ordinary, whether it be the look of a 'scrumpled' towel on a rack or confronting a Fuller Brush salesman. She can the make the earthly divine and the divine earthly."
—Richard Armour, Los Angeles Times

"I can think of no novel in recent years so delicately balanced, so delicately written, executed with such elegance. It is altogether satisfying. Segal's distinctive style, a voice entirely her own...is as orginal a tone as, say, Grace Paley's when she tells her stories. It is Lucinella's elegant humorous tongue that gives a fine, tasty point to this light-hearted novel about serious matters like art and love."
—Doris Grumbach, The Washington Post

"And now, at last, Lucinella—a funny, nervous, affecting novel about a poet trying and failing to bring some order to her life and craft. The triumph of the novel is Lucinella herself, whom we come to trust and care for and worry about and despair of. Lucinella is surely the nicest person ever to appear in a novel about New York writers."
—John Leonard, The New York Times Book Review

"An entrancingly witty anatomy of our (East Coast) literary life, but more than that it is a tough little book that knows very well that charm is not enough. A Pilgrim's Progress of sorts, it would be wrong to underestimate the ambitiousness of its myth just because of its unpretentiousness."
—The Nation

"Lore Segal dissects the New York literary environment with the skill of a master surgeon and sticks it under the microscope, bit by bit, for us to examine. Ms. Segal has written a full and witty book, spiced with fantasy but firmly rooted in the planet."
—Chicago Sun-Times

"Marvelously inventive in its creation of metaphor for the world of literary friendships. There is in the style of Lucinella the simplicity, clarity, and crispness of expression one finds in the best writing for children, the ease with magic and imagery found in the best fairy tales. This novel of modern literary life is short but not slight. It has epic qualities."
—Helen Weinberg, Cleveland Plain Dealer

"This odd, wonderful, nervous-breakdown-in-the-form-of-a-novel is going to find an audience that will read it, re-read it, and love every perfect word of it."
—Richard Lipez, Newsday

"Quite messily charming... Lore Segal's novel is lighter than air on a clear day or the next flyaway fancy as she flirts with myth and metaphor and excitement and disintegration."
—Kirkus Reviews

"Lore Segal has taken our literary life apart so sweetly that no one will want to put it together again. Lucinella is a witty, elegant, beautiful book.”
—William Gass

"Lucinella is a shamelessly wonderful novel, so flawless one feels civilized reading it."
—Stanley Elkin

"Lucinella is a perfectly simple, wonderful, magical book. It's as light and innocent as a fantasy, yet all the materials of the fantasy are as convincing as life... It's the best book I know about how poets and novelists really are, as husbands or wives, as lovers, as cocktail-party friends."
—John Gardner

Lore Segal was born in Vienna, Austria in 1928. Her father was an accountant in a bank, but as a Jew was fired when the Nazis came to power in 1938. With the rise of violent anti-Semitism in Vienna, Segal's parents sent her to England as part of the Kindertransport children's rescue mission. But, while living in a series of foster homes, the ten-year old girl conducted a campaign of such vigorous letter-writing to British authorities that her parents were eventually allowed to join her. Her father, however, died just before the end of the war. Supported by her mother working as a cook, Segal managed to graduate from the University of London, and in 1951 emigrated to the United States. She held a variety of jobs–in a shoe factory, as a receptionist, teaching English–while writing stories that she soon began selling to major magazines. In 1964, to great acclaim, she published Other People's Houses, a novel based on her refugee experience as a child, which had been serialized in the New Yorker. Meanwhile, in 1961, she had married David Segal, who became an editor at Knopf. He died in 1970. For her two children, Segal began to write and translate children's books, including an award-winning collection of Grimm's fairy tales with illustrator Maurice Sendak. She returned to adult fiction in 1976 with her novella Lucinella. Segal has since taught at universities, including Columbia and Princeton, and won numerous writing prizes, including an award from the American Academy of Arts and Letters for her 1985 novel Her First American. Her most recent book, the 2007 story collection Shakespeare's Kitchen, was a finalist for the Pulitzer Prize. Lore Segal lives in New York City.
or
Not Currently Available for Direct Purchase