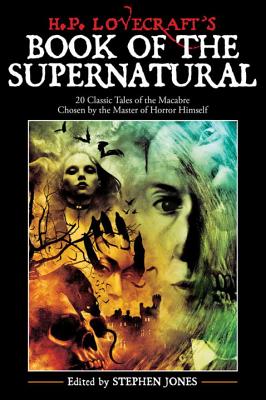 20 Classic Tales of the Macabre, Chosen by the Master of Horror Himself

”The reader would do well to remember that it is Lovecraft‘s shadow which overlies almost all of the important horror fiction.”—Stephen King

Written by arguably the most important horror writer of the twentieth century, H. P. Lovecraft’s 1927 essay “Supernatural Horror in Literature” traces the evolution of the genre from the early Gothic novels to the work of contemporary American and British authors. Throughout, Lovecraft acknowledges those authors and stories that he feels are the very finest the horror field has to offer: Washington Irving, Edgar Allan Poe, Henry James, Rudyard Kipling, Bram Stoker, Robert Louis Stevenson, Guy de Maupassant, Ambrose Bierce, and Arthur Conan Doyle, each prefaced by Lovecraft's own opinions and insights in their work. This chilling collection also contains Henry James’ wonderfully atmospheric short novel The Turn of the Screw.

For every fan of modern horror, here is an opportunity to rediscover the origins of the genre with some of most terrifying stories ever imagined.

Stephen Jones is one of Britain’s most acclaimed horror and dark fantasy writers and editors, with more than 140 books to his credit. He is a Hugo Award nominee and the winner of three World Fantasy Awards, three International Horror Guild Awards, four Bram Stoker Awards, twenty-one British Fantasy Awards, and a Lifetime Achievement Award from the Horror Writers Association. You can visit his web site at www.stephenjoneseditor.com or follow him on Facebook at Stephen Jones-Editor. He lives in London, England.

Praise For H. P. Lovecraft's Book of the Supernatural: 20 Classic Tales of the Macabre, Chosen by the Master of Horror Himself…

For anyone interested even faintly in good horror writing, what we have here is pure gold: Lovecraft's own selection of the best the genre has to offer, along with his comments on the individual stories. Talk about the horse’s mouth! This book is long overdue.
— Peter Straub
or
Not Currently Available for Direct Purchase
Copyright © 2020 American Booksellers Association