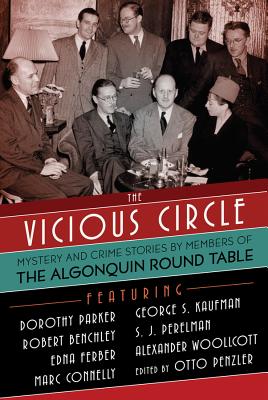 Mystery and Crime Stories by Members of the Algonquin Round Table

The mystery and crime fiction of the Algonquin Round Table.

With the possible exception of the expatriate writers living in Paris in the 1920s, no single group of American literary figures has achieved as much fame or notoriety as the New York sophisticates who met to match wits and attempt to outshine each other as members of what came to be called the Algonquin Round Table.

The humorists Robert Benchley and S. J. Perelman, playwrights Marc Connelly and George S. Kaufman, novelists Edna Ferber and Alexander Woollcott, and most famously, Dorothy Parker, were the literary luminaries who made up this group, and each one produced a piece or two of crime fiction at some point, which are collected for the first time in this anthology by acclaimed mystery editor Otto Penzler.

Otto Penzler is the proprietor of the Mysterious Bookshop in New York City. He is the founder of the Mysterious Press and Otto Penzler Books, and has received an Edgar Award, an Ellery Queen Award, and a Raven Award for his contribution to the mystery field. His anthology The Black Lizard Big Book of Pulps was a New York Times Bestseller.
or
Not Currently Available for Direct Purchase
Copyright © 2020 American Booksellers Association