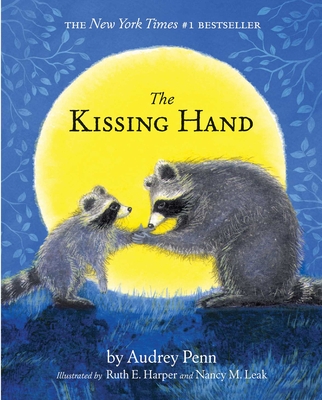 School is starting in the forest, but Chester Raccoon does not want to go. To help ease Chester's fears, Mrs. Raccoon shares a family secret called the Kissing Hand to give him the reassurance of her love any time his world feels a little scary. Since its first publication in 1993, this heartwarming book has become a children's classic that has touched the lives of millions of children and their parents, especially at times of separation, whether starting school, entering daycare, or going to camp. It is widely used by kindergarten teachers on the first day of school. Stickers at the back will help children and their parents keep their Kissing Hand alive.

Ruth Harper was born in England, is a descendent of Sir Christopher Wren, and lived in six countries before coming to America. She has been an art teacher, where she wrote an accredited art curriculum, presented seminars on art education, been a guest illustrator at elementary schools, and has donated many works to fund-raising events.
or
Not Currently Available for Direct Purchase
Copyright © 2020 American Booksellers Association