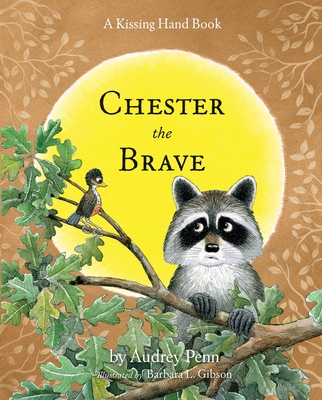 Little Chester Raccoon, the beloved character who has helped so many children with issues in their lives, learns the meaning of bravery and a method for overcoming his fears in this new Audrey Penn title. After sharing the story of a little bird who is afraid to have flying lessons in front of his friends, Mrs. Raccoon tells Chester that being brave doesn't mean being unafraid; being brave means not letting that fear stop him. Mrs. Raccoon teaches Chester an important strategy: Think-Tell-Do. When he thinks he is afraid, he tells himself he can do it, and then he just does it. Of course, getting a Kissing Hand helps a little too. This simple strategy can be helpful to children in many different situations.

Praise For Chester the Brave (The Kissing Hand Series)…

An award-winning illustrator, Barbara Leonard Gibson was a freelance artist in the Baltimore-Washington area for twenty-five years. Originally from New York, and with a degree in Fine Art and Design from Carnegie Mellon University, she worked in many areas including historical illustration, children’s books, and magazines, cartooning, portraiture, wildlife illustration, natural sciences, advertising, fantasy, and science fiction.
Loading...
or
Not Currently Available for Direct Purchase