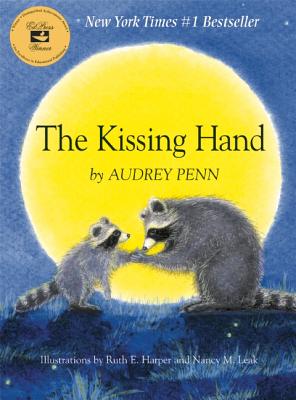 School is starting in the forest, but Chester Raccoon does not want to go. To help ease Chester's fears, Mrs. Raccoon shares a family secret called the Kissing Hand to give him the reassurance of her love any time his world feels a little scary. Since its first publication in 1993, this heartwarming book has become a children's classic that has touched the lives of millions of children and their parents, especially at times of separation, whether starting school, entering daycare, or going to camp. It is widely used by kindergarten teachers on the first day of school. Stickers at the back will help children and their parents keep their Kissing Hand alive.
For the 20th anniversary of this children's classic, the book is shrink-wrapped with a set of heart-in-palm gloves, along with a special letter fromthe authorto her readers.

Audrey Penn is the author of the NY Times bestseller, The Kissing Hand, and its sequels, along with the Blackbeard series for middle readers. She takes her education program into schools, libraries, and children's hospitals, where she shapes and refines her story ideas in partnership with kids. She live in Durham, NC. Ruth E. Harper was born in the tiny English town of Burnham-on-Crouch. She has lived and studied in Israel and Cyprus, as well as in England and the US. She has illustrated in a wide variety of styles, including technical drawings that were accepted by the U.S. Patent Office when she was 13 years old. Maryland artist Nancy M. Leak is a specialist in printmaking. She works and exhibits with a group of seven women called Printmakers Plus, as well as with other local and national organizations. Her hand-pulled original etchings, many of them miniatures, have won recognition all over the U.S.
Loading...
or
Not Currently Available for Direct Purchase