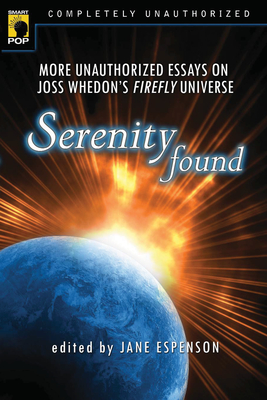 A lot has happened since Finding Serenity. We learned River's secret; Mal took on the Alliance. Our favorite crew became Big Damn Heroes. And the Browncoats proved that hard work, passion and a little fan coordination can do the impossible. Serenity Found takes the contents of Finding Serenity even further, exploring not just the show but the events of the film as well, to create an anthology that's even more thought-provoking, fascinating and far-thinking than its predecessor.

* Acclaimed science fiction author Orson Scott Card lauds "Serenity" as film sci-fi finally done right
* Writer and comedian Natalie Haynes reveals the real feminist savvy of the "Firefly" universe: the girls get the guns and the gags
* Pop culture critic Michael Marano connects damaged, ass-kicking River to the other weaponized women of the Whedonverse
* Multiverse executive producer Corey Bridges explains why the world of "Firefly" is the perfect setting for an MMORPG
* Mutant Enemy's visual effects wizard Loni Peristere relates what he's learned from Joss about telling stories, and tells a story of his own about Serenity's design
* Television Without Pity recapper Jacob Clifton frames "Serenity" as a parable about media: how it controls us, how we can control it and how to separate the signal from the noise
* And Nathan Fillion, "Firefly" and "Serenity's" Captain Malcolm Reynolds, shares his affinity for Mal and his love of Mal's ship and crew.

"Lots of fun, lots of new insights, even some new facts a diehard Browncoat like me hadn’t heard yet."

Jane Espenson is a former writer for Firefly, in addition to many other television shows, including Angel, Battlestar Galactica, Buffy the Vampire Slayer, Dinosaurs, Gilmore Girls, Ellen, The O.C., and Star Trek: Deep Space Nine. She currently has a development deal with NBC/Universal television and is working on the midseason show Andy Barker, PI. She lives in Los Angeles.
Loading...
or
Not Currently Available for Direct Purchase