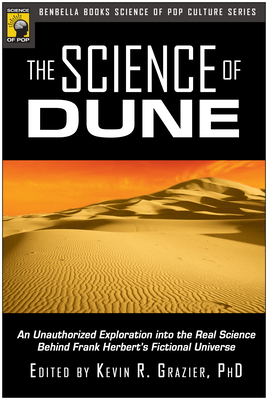 The Science of Dune

Get excited for the 2021 Denis Villeneuve Dune film release, starring Timothée Chalamet, with The Science of Dune!

Since its original publication in 1965, the Dune series has entranced generations of readers with its complex plotting, fascinating characters, grand scope, and incredible scientific predictions.
This guide offers fascinating scientific speculation on topics including quantum physics, biochemistry, ecology, evolution, psychology, technology, and genetics. It scrutinizes Frank Herbert’s science fiction world by asking questions such as:

• Is the ecology of Dune realistic?
• Is it theoretically possible to get information from the future?
• Could humans really evolve as Herbert suggests?
• Which of Herbert’s inventions have already come to life?

This companion is a must-have for any fan who wants to revisit the world of Dune and explore it even further.

Praise For The Science of Dune: An Unauthorized Exploration into the Real Science Behind Frank Herbert's Fictional Universe…

"An indispensable volume for Dune fans everywhere, and another validation of Herbert’s fictional universe as one of sf’s towering achievements."

Kevin Grazier, PhD, is the science advisor for the Sci-Fi Channel series Battlestar Galactica and Eureka and the PBS animated series The Zula Patrol. He also works at NASA’s Jet Propulsion Laboratory. He splits his time living in Sylmar, California, and Mesa, Arizona.
Loading...
or support indie stores by buying on