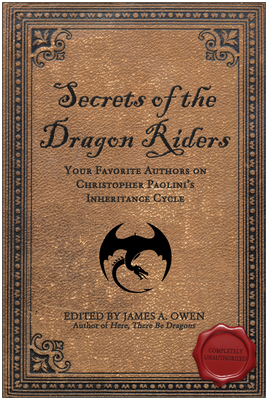 Secrets of the Dragon Riders

Millions of readers adore Christopher Paolini's Inheritance Cycle: its earnest hero, its breathtaking battles and, of course, its awe-inspiring dragon Saphira. But there's so much more to the series than meets the eye—and Secrets of the Dragon Riders, edited by today's second hottest dragon-writer James A. Owen, shows readers what they're missing.

Why might Roran be the real hero of the Inheritance Cycle? What does Paolini's writing have in common with role-play games and modern action films? Are teenage writers judged more harshly than their adult counterparts? The YA authors in Secrets of the Dragon Riders—some of them no older than Paolini when he wrote Eragon—each take on a different aspect of the series to engage and entertain Paolini fans.

James A. Owen is the author and illustrator of the Chronicles of the Imaginarium Geographica—which includes Here, There Be Dragons, The Search for the Red Dragon, and The Indigo King—as well as the Starchild comic series. He lives and works in northeastern Arizona.
Loading...
or support indie stores by buying on