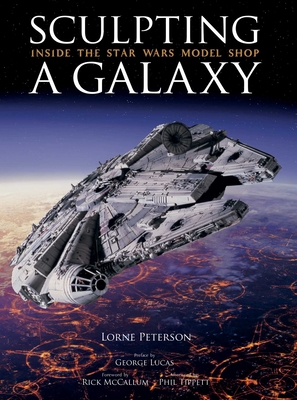 Inside the Star Wars Model Shop

The Star Wars films have provided some of the most iconic images in modern filmmaking - from the incredible shot of the Imperial Star Destroyer that opened the first film in 1977 to the Podrace in The Phantom Menace and the epic battle on the volcanic world of Mustafar in Revenge of the Sith. In each of these cases, and literally hundreds more, the model-making wizards of Industrial Light & Magic were instrumental in creating a universe full of glorious, heart-pounding illusions. In Sculpting a Galaxy: Inside the Star Wars Model Shop, Lorne Peterson, one of the founding members of ILM, takes the reader on a journey through thirty years of incredible adventures, telling never-before-published stories, explaining how classic scenes were created, and how beloved models were - often from the most unexpected of parts and ingredients. Paint buckets, model car parts, and walnut shells play important roles, alongside high-tech lasers and computer graphics, in creating the familiar yet fantastic components of a galaxy far, far away. Lavishly illustrated with more than 300 full-color photographs from the Lucasfilm Archives, this book provides an unparalleled look behind the scenes of a place that really has created magic. Lorne Peterson's warm, evocative voice and dedication to his craft inform every page, making this not just a stunning visual piece, but an epic history in its own right.

Lorne Peterson is one of the founding members of Industrial Light & Magic. He was hired by George Lucas to help create the models for the first Star Wars movie in 1975. In 1978, Peterson was invited by Lucas to oversee the entire production of models for The Empire Strikes Back. His signature is evident on nearly every model used in the original trilogy. Peterson's work is also showcased in the entire Star Wars saga, Indiana Jones and the Temple of Doom, Jurassic Park, Men in Black, Galaxy Quest, and the Pirates of the Caribbean films. He was honored with an Academy Award® and a BAFTA Award for the special effects work in Indiana Jones and the Temple of Doom. This is his first book.
Loading...
or support indie stores by buying on
(This book is on backorder)