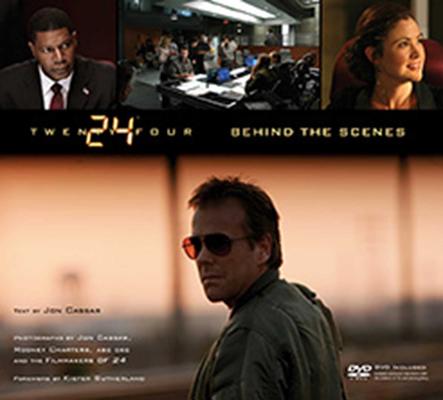 Go behind the scenes of the show that redefined action adventure for an insider's look at cast, crew, unscripted moments, and amazing stunts and effects captures by Director/Co-Executive Producer Jon Cassar, Cinematographer Rodney Charters and their 24 filmmaking colleagues. With a fine cast of recurring actors, a growing slate of guest stars and the show's unforgettable star, Kiefer Sutherland, who portrays the tenacious Jack Bauer, 24 is one of television's best-loved programs broadcast today. Featuring many behind-the-scenes photos by photographer/director Cassar, this compelling archive of candid shots and stories is a must-have item for 24 fans the world over. Included in this first-time photo book are over 200 color and black-and-white photographs, most never-before-published, capturing the work, adrenaline, and good times from behind the scenes. From an insider's view relive some of Michells Dessler's death sequence; read about the controversial in-house debate over Teri Bauer's season one murder; get inside the set design for Air Force One, the White House, and the anti-bioweapon Bubble unit; take the director's view of the assassination attempt location; discover tales behind the season five finale, and more.

Jon Cassar is a new style of television director - an in-house director who commits to one show, shepherding its shooting over several years. Nominated for an Emmy as Outstanding Director for a Drama Series, he is also acclaimed for directing and producing 24 by the Directors Guild of America. Cassar started in the film industry as a camera operator and his sharp eye and keen sense of story-telling led him to break into directing in 1992, directing episodes of such series as Profiler and Le Femme Nikita. Cassar is hailed among action genre directors for his deft handling of intricate action sequences, while actors relish working with him because he is what Hollywood insiders call an "actor's director." He also directs feature films through his company, Cassar Filmworks.
Loading...
or
Not Currently Available for Direct Purchase