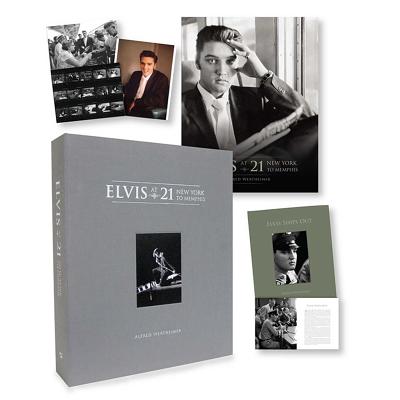 In 1956, a twenty-one-year-old Elvis Presley was at the beginning of his remarkable and unparalleled career and photographer Alfred Wertheimer was asked by Presley's new label, RCA Victor, to photograph the rising star. With unimpeded access to the young performer, Wertheimer was able to capture the unguarded and everyday moments in Elvis' life during that crucial year, a year that took him from Tupelo, Mississippi to the silver screen, and to the verge of international stardom and his crowning as "The King of Rock 'n' Roll." As Alfred Wertheimer photographed Elvis during 1956, and again in 1958, he created classic images that are spontaneous, unrehearsed and completely without artifice. Wertheimer's photographs of Elvis are extraordinary and he appears almost ethereal, whether reading a newspaper while waiting for a cab, or washing his hands during one of his many train trips. After 1958 and Elvis' induction into the army, the world seemingly forgot about Wertheimer's magical photographs- for nineteen years- until Aug 16, 1977, the day Elvis died and Time Magazine called. "The phone hasn't really stopped ringing in the last thirty years," observes Wertheimer. Many of the photographs in this visual treasury are previously unpublished and some have become almost as famous as the man himself. Limited edition features: 1,500 copies, comes in a clamshell box with a signed photograph and contact sheet, clothbound portfolio case containing four limited edition photographic prints (11 x 14), and an exclusive edition of Elvis Ships Out (a 48 page, cloth bound, 8 x 10, keepsake archive of Elvis' stint in the US Army).

Alfred Wertheimer began his career as a photojournalist in 1951, publishing work in such magazines as Life and Colliers. His photographs are in the permanent collections of the Experience Music Project (Seattle, Washington) and the Folkwang Museum (Essen, Germany). He has photographed such notables as Eleanor Roosevelt, Leonard Bernstein, and Elizabeth Taylor, and worked as a principal cameraman for the documentary Woodstock.
Loading...
or support indie stores by buying on