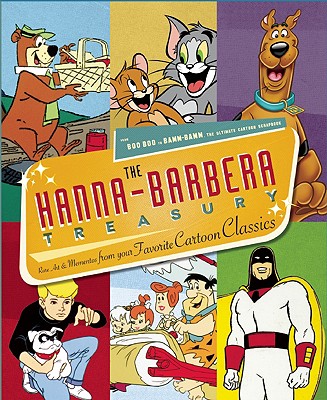 Here, for the first time, is a showcase presentation of the best of the art from the legendary Hanna-Barbera studio.
"The Hanna-Barbera Treasury" celebrates the legacy of Bill Hanna and Joe Barbera through more than five decades of rare drawings, storyboards, concept art, and memorabilia from studio archives and private collections. It includes more than 24 removable artifacts and facsimile reproductions, as well as photographs, sketches, comic book covers, brochures, and posters. Vintage art, rare merchandising images, retro product packages, and archival newspaper and magazine ads transport the reader back in time to an era when a brave new medium invaded our living rooms to create a new art form: the prime-time family cartoon.
In a world flooded by rapidly changing images, few are able to maintain the appeal that has defined the characters of Hanna-Barbera for more than 50 years. Since first joining forces as a pair of young animators, Bill Hanna and Joe Barbera won the hearts of more than three generations. The duo won seven Academy awards at MGM during the golden age of the Hollywood cartoon, and still, decades later, their best-loved characters, having made their debut in television's early days, are household names.
Today, it is not uncommon for three generations to share the joy of Hanna-Barbera's creations, including such classics as Huckleberry Hound, Tom and Jerry, Scooby-Doo, Yogi Bear, The Flintstones, The Jetsons, Jonny Quest, Magilla Gorilla, Top Cat, and Space Ghost. Written by animation historian Jerry Beck, "The Hanna-Barbera Treasury" will be eagerly sought by those who grew up with these characters as well as a new generation of cartoon fans.