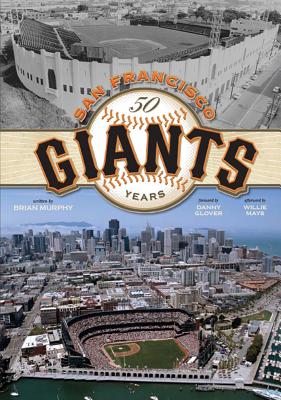 The San Francisco Giants celebrate more than 50 years in the City by the Bay. Follow the Giants from their early days at Seals Stadium to Candlestick Park to latest decade led by Barry Bonds, from the World Series in 1962 and 1989 (and the earthquake) to the National League Pennant in 2002. Player profiles include 1968 no-hit hurler Gaylord Perry, and high-kicking Juan Marichal; slugger Willie McCovey, National League MVP in 1969, and of course the great Willie Mays, who hit over 600 career homers with the Giants. Other chapters cover stories such as how in 1963 Jesus Alou joined his siblings Felipe and Matty on the roster, giving the team the first all-brother outfield in Major League history. Join some of San Francisco's famous fans, from Peanut's creator Charles Schulz to Danny Glover, Carlos Santana and Robin Williams, in celebration of this golden anniversary. In addition to the often rare and amazing visual history presented in this book, each chapter features reproductions of Giants memorabilia that will provide fans a complete San Francisco Giants scrapbook. And an audio CD of famous play-by-play radio calls, player interviews and more -- collected here for the first time -- makes this book a lasting pleasure.

Brian Murphy is the co-host of the popular Murph and Mac morning radio show on KNBR 680 in San Francisco. Prior to his work as a radio personality Murphy spent seven years as a 49ers beat writer for the Santa Rosa Press Democrat and San Francisco Chronicle. Additionally, he has authored several books, including Never. Say. Die.: The San Francisco Giants--2012 World Series Champions; The Last Putt: Two Teams, One Dream, and a Freshman Named Tiger; Worth the Wait; and San Francisco Giants: 50 Years. He lives in Mill Valley, California.
or
Not Currently Available for Direct Purchase