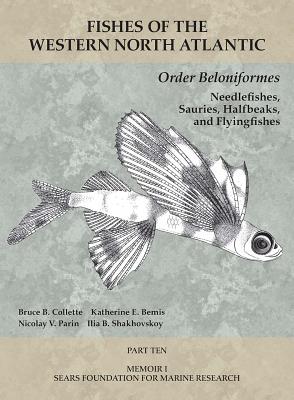 An authoritative guide to the identification, systematics, distribution, and biology of the thirty-eight species of the Order Beloniformes in the western North Atlantic Ocean

The final volume in the Fishes of the Western North Atlantic series covers the Beloniformes, a diverse order of fishes containing six families and at least two hundred and thirty extant species found worldwide in marine and freshwater environments. This excellently illustrated, authoritative book describes the thirty-eight species of beloniform fishes—needlefishes, sauries, halfbeaks, and flyingfishes—that live in the western Atlantic Ocean. Compiled from new revisions, original research, and critical reviews of existing information, this tenth book in the series completes a major reference work in taxonomy and ichthyology for both amateurs and professionals, and all students of the sea.