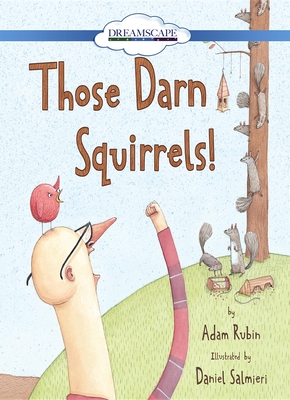 Old Man Fookwire has a plan. He'll build some birdfeeders and fill them with yummy seeds and berries. That way, the wild birds he loves so much will stick around for the winter - instead of flying south. But there are other hungry creatures in the forest, and they have plans, too... Those darn squirrels In this whimsical picture book, a grumpy old man and some mischievous squirrels match wits - with hilarious results. Winner of a 2009 Borders Original Voices Award, and a 2009 Children's Choice Award nominee.

Adam Rubin is the author of the New York Times Best Selling book Dragons Love Tacos and the critically-acclaimed Those Darn Squirrels trilogy. During the day Adam Rubin works as Creative Director at a fancy digital advertising agency in New York City. At night, Adam indulges his hobbies as a puzzle collector and magic trick aficionado.

Kirby Heyborne has received critical acclaim for his starring role in the award-winning World War II drama Saints and Soldiers. He has had starring roles in eight other features and two short films, and has also appeared on the WB's Everwood and many national commercials. He has garnered rave reviews for his narration for Books on Tape over the years and is considered one of the finest narrators working today.

Daniel Salmieri is an artist and illustrator from Brooklyn, New York. When he's not shooting art out of his hands, he travels the country in search of the perfect blintz.
or support indie stores by buying on