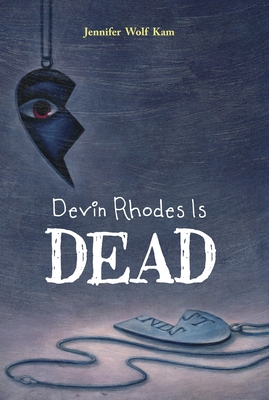 Devin Rhodes is dead. It's my fault.

High school freshman Cass is conflicted about her love/hate relationship with her best friend, Devin, and struggles to handle Devin's sudden death. How did Devin’s body end up at the bottom of Woodacre Ravine? Was Cass really responsible? Is Devin reaching out to her from beyond the grave? Tension mounts as Cass fights to stay a step ahead of the police—and Devin's mother—unable to face the real truth.

Told in alternating "Before" and "After" chapters, this engrossing ghostly coming-of-age tale will draw you in and keep you turning pages until the dramatic conclusion.

Praise For Devin Rhodes Is Dead…

Convinced she is responsible for her best friend’s death, Cass feels haunted by Devin’s ghost even as she tries to hide her guilt.

Cass gradually reveals the actual events in chapters that alternate between “after” and “before.” Devin is not the most likable of creatures though infinitely prettier than her more “ample” friend and completely boy-obsessed. Fifteen-year-old Cass recalls various humiliations at Devin’s hands as well as her increasing isolation from other friends as the result of Devin’s machinations. As the truth of the killing finally emerges, first-time novelist Kam keeps atmosphere, suspense and characters realistically entwined. The language has a somewhat old-fashioned flavor, and although readers are soon likely to suspect that Cass is a rather unreliable narrator, Cass’ supernatural experience and revelation of events unfold smoothly. The well-developed cast of characters provides the needed red herrings in classic mystery fashion. The story is ideal for middle school readers who are on the cusp of discovering their romantic selves; Devin’s reckless, sexualized encounters with the opposite sex contrast well with Cass’ careful exploration of her own interest in a boy who actually sees her and finds her attractive. The charm necklaces the two girls purchase to epitomize their best friend status thread symbolically through the narrative, keeping the focus on their relationship.

Jennifer Wolf Kam is a three-time finalist for the Katherine Paterson Prize for Young Adult and Children’s Writing. Jennifer earned her MFA in Writing for Children and Young Adults from Vermont College of Fine Arts. She lives in New York.
Loading...
or
Not Currently Available for Direct Purchase