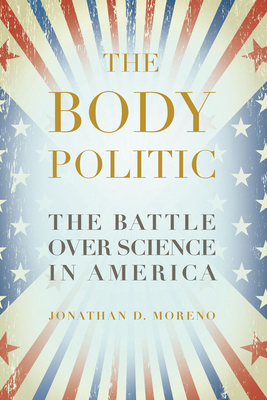 The Battle Over Science in America

We have entered what is called the "biological century" and a new biopolitics has emerged to address the implications for America's collective value system, our well-being, and ultimately, our future. The Body Politic is the first book to recognize and assess this new force in our political landscape--one that fuels today's culture wars and has motivated politicians of all stripes to reexamine their platforms. As Moreno explains the most contentious issues, he also offers an engaging history of the intersection between science and democracy in American life, a reasoned (and often surprising) analysis of how different political ideologies view scientific controversies, and a vision for how the new biopolitics can help shape the quality of our lives.

Jonathan D. Moreno is the David and Lyn Silfen University Professor at the University of Pennsylvania and the editor-in-chief for the Center for American Progress' online magazine, Science Progress. He divides his time between Philadelphia and Washington, DC.


Praise For The Body Politic: The Battle Over Science in America…

An impassioned defense of scientific study . . . an essential dose of logic.” Salon

Regardless of who ends up occupying the White House in January 2013, one hopes that a few hours will have been set aside on the campaign trail to engage with this important book.” Times Higher Education

An excellent guide . . . In his highly readable and provocative book, Moreno makes clear that progress, including biotechnological progress, is still America’s most important product.” Reason magazine

A timely take on the debate raging over biotechnology breakthroughs . . . Moreno shows how developments in biotechnology have affected people across the ideological spectrum. . . . conservatives concerned about abortion, neoconservatives worried about threats to human dignity and liberals fretting that new biotechnologies will exacerbate existing economic inequality.” Nature

The most penetrating characterization and analysis of the shrill political battles fought over the use of our new biotechnologies (and the battles to come).” American Journal of Bioethics (AJOB)

Human cloning. Synthetic biology. Mood (and mind) altering drugs. Personalized medicine . . . The human future may be very different from the human past as these changes are negotiated and assimilated. And so may human politics. To help us prepare for this radical future is Jonathan Moreno, author of the new book The Body Politic: The Battle Over Science in America, which underscores the strange bedfellow allegiances that may occur in what has been called our biological century’.” Point of Inquiry

Scholarly, sophisticated and compelling . . . If only more of our contemporary political battles were as careful, as cogent and as well grounded as The Body Politic, I’d be more confident that the unprecedented decisions being forced upon society by revolutionary advances in biology would most wisely and effectively be made.” Washington Independent Review of Books

An important analysis of the societal currents swirling around volatile scientific issues . . . Moreno delivers a powerful defense of science [and] respects his readers’ intelligence in this nuanced and thoughtful book.” Publishers Weekly

Moreno shows how biological discoveries aggravate cultural tensions, challenge our political system and values, and stimulate debate about the place of science and scientists in America. . . . Sophisticated, useful, and well-written.” Library Journal

A concise but nuanced account of Enlightenment and post-Enlightenment debates about the role of science in American life.” CHOICE

Historians will agree that progress” is as American as apple pie. What constitutes progress, of course, is always a point of contention. In The Body Politic, Jonathan D. Moreno examines the attitudes Americans hold about modern science’s treatment of the human body. . . . Throughout the discussion, it’s clear he has his thumb on the cultural and historical contexts in which these issues have arisen [and] Moreno explains that people on both sides of the aisle are expressing concern for unrestricted use of bioscience for different reasons . . . an excellent addition to any syllabus.” ForeWord Reviews

Moreno shrewdly tracks the history of science in American politics from Thomas Jefferson to today’s science culture wars. He explains how science and discovery have been central to our vision for the country, but often fueled a significant counter reaction. A must read for anyone who wants to understand science policy today.” John Podesta, former White House Chief of Staff

Since the beginning of our quest to win the Indianapolis 500 our family has believed in the power of technology. The only limits to that technology have been human ones. The Body Politic reminds us that in biology as well as engineering, America will always need that pioneer spirit.” Al Unser, Sr., Al Unser, Jr., Bobby Unser, Sr., Indianapolis 500 Champions

The Body Politic is required reading for anyone who wants to understand the history of American political thought about science, the dynamics of current controversies such as the stem cell debate, and the battle between those who see science as the route to a better future and those who see within the science the potential for a loss of our sense of human distinctiveness and dignity.” Paul Root Wolpe, Ph.D., Director, Center for Ethics, Emory University & Chief of Bioethics for the National Aeronautics and Space Administration (NASA)

This groundbreaking must-read book situates the biological revolution in its historical, philosophical and cultural context and, with almost breathtaking elegance, shows how society may come to define itself by the body politic.” Nita A. Farahany, Associate Professor of Law & Associate Professor of Philosophy, Vanderbilt University; Member, Presidential Commission for the Study of Bioethical Issues

The Body Politic is a penetrating and uncommonly fair-minded analysis of how science is construed, nourished, and antagonized across the rainbow of American thought and belief. Highly recommended for all those who would base their political opinions on facts, rather than on other people’s opinions.” Timothy Ferris, journalist, PBS filmmaker and author of The Science of Liberty: Democracy, Reason, and the Laws of Nature

Provides a fascinating, timely exploration of one our era’s most momentous issues, the applicationsand misapplicationsof biomedical research.” John Horgan, author of Rational Mysticism and Director, Center for Science Writings, Stevens Institute of Technology

Moreno clarifies major points of science-society tension over the last half century and brings a sharp eye to the societal context confronting future advances and their applications.” Alan I. Leshner, Ph.D., American Association for the Advancement of Science (AAAS) CEO and Science Executive Publisher

The Body Politic reminds us that science occurs within a complex context that exerts powerful forces upon scientists, public officials, advocacy groups, and patients. Moreno has written the kind of book that needed to be written, combining detailed research, enlightened analysis, and an important message, all wrapped in accessible text.” Eric M. Meslin, Ph.D., Director, Indiana University Center for Bioethics

Called the "most interesting bioethicist of our time" by the American Journal of Bioethics, Jonathan D. Moreno has served as a senior staff member for three presidential advisory commissions, as well as on the Bill and Melinda Gates Foundation Bioethics Advisory Board for the Grand Challenges in Global Health Initiative. Author and editor of many seminal books and articles on science and science policy, he is the David and Lyn Silfen University Professor at the University of Pennsylvania and the editor-in-chief for the Center for American Progress' online magazine, Science Progress.
Loading...
or support indie stores by buying on