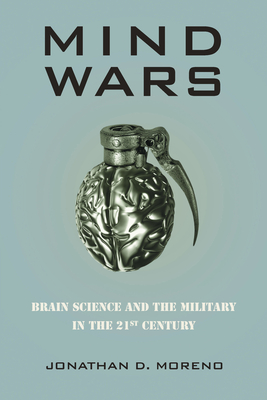 "One of the most important thinkers describes the literally mind-boggling possibilities that modern brain science could present for national security." --LAWRENCE J. KORB, former US Assistant Secretary of Defense

"Fascinating and frightening." --Bulletin of the Atomic Scientists

The first book of its kind, Mind Wars covers the ethical dilemmas and bizarre history of cutting-edge technology and neuroscience developed for military applications. As the author discusses the innovative Defense Advanced Research Projects Agency (DARPA) and the role of the intelligence community and countless university science departments in preparing the military and intelligence services for the twenty-first century, he also charts the future of national security.

Fully updated and revised, this edition features new material on deep brain stimulation, neuro hormones, and enhanced interrogation. With in-depth discussions of "psyops" mind control experiments, drugs that erase both fear and the need to sleep, microchip brain implants and advanced prosthetics, supersoldiers and robot armies, Mind Wars may read like science fiction or the latest conspiracy thriller, but its subjects are very real and changing the course of modern warfare.

Jonathan D. Moreno has been a senior staff member for three presidential advisory commissions and has served on a number of Pentagon advisory committees. He is an ethics professor at the University of Pennsylvania and the editor-in-chief of the Center for American Progress' online magazine Science Progress.

There has been virtually no debate on the ethical questions raised by the brave new brain technologies. . . . The time to speak up is before the genie is out of the bottle.” Wall Street Journal

Quietly provocative . . . Moreno takes an evenhanded, thorough look at how deeply the intelligence and defense communities are involved in many of those advances and the mindfields that might lie ahead.” Cleveland Plain Dealer

Even-handed and thought-provoking. [Mind Wars] is very readable, and easily accessible to people without a background in neuroscience.” Neurophilosophy at the Guardian

More than a serious work of public policy, the volume is a son’s quest to understand the work of his psychiatrist father, who pioneered lysergic acid diethylamide (LSD) experiments in the 1960s . . . Moreno deserves credit for having the courage to go where no bioethicist has gone before. His philosophical forays into mind-brain questions are learned, and his narrative about the rise of big science and the garrison state” represents a provocative historical synthesis. . . . Mind Wars is not the last word on this fascinating, frightening, and potentially transformative corner of neuroscience and neuroethics. But it is the first.” Journal of the American Medical Association (JAMA)

A fascinating and sometimes unsettling book. . . . Any academic involvement in military research presents an ethical dilemma, and Moreno’s exploration of this theme is one of the most interesting aspects of the book.” Nature

The world we encounter in Mind Wars is like the world in [Philip K.] Dick’s A Scanner Darkly.” Conspiracy Times

Renowned bioethics authority Moreno travels to the nexus of brain science, engineering, and national security to explore the connections between neuroscience research and national defense agencies. . . . Given the topic’s provocative nature, this is recommended for all science and bioethics collections.” Library Journal

This will certainly be the source book on the ways in which neurobiology may rewrite the rules of warfare, spying and intelligence collection in the twenty-first century.” ARTHUR L. CAPLAN, Director of the Center for Bioethics at the University of Pennsylvania

Few people ever think about brain research as a national security discipline. This intriguing and provocative book lays out how neurotechnologies for brain analysis, repair and enhancement can be multi-purpose and serve both good and nefarious functions.” ALAN I. LESHNER, Ph.D., American Association for the Advancement of Science (AAAS) CEO and Science Executive Publisher

Fascinating, clear-headed, optimistic, and lucidly written, Mind Wars makes a compelling yet nuanced case for scientific progress in the area of neurology enhancement and for the transparent collaboration of the academy and the military.” SALLY SATEL, M.D., author of PC, M.D.: How Political Correctness Is Corrupting Medicine and Resident Scholar at American Enterprise Institute

Jonathan D. Moreno has been a senior staff member for three presidential advisory commissions and has served on a number of Pentagon advisory committees. He is the author and editor of many seminal books, including Mind Wars: Brain Science and the Military in the 21st Century and The Body Politic: The Battle Over Science in America, a Kirkus Reviews Best Book of the Year. Called the "most interesting bioethicist of our time" by the American Journal of Bioethics, Moreno is currently the David and Lyn Silfen University Professor at the University of Pennsylvania and the editor-in-chief for the Center for American Progress' online magazine, Science Progress.
Loading...
or support indie stores by buying on