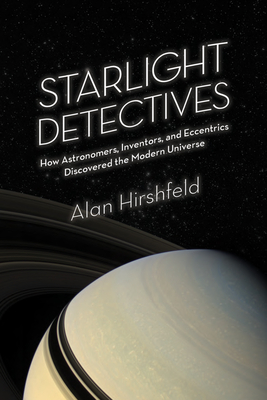 How Astronomers, Inventors, and Eccentrics Discovered the Modern Universe

Julia Ward Howe Award Finalist
NBC News "Top Science and Tech Books of the Year" selection
Scientific American/FSG "Favorite Science Books of the Year" selection
Nature.com "Top Reads of the Year" selection
Kirkus Reviews "Best Books of the Year" selection
Discover magazine "Top 5 Summer Read" "A masterful balance of science, history and rich narrative." --Discover magazine "Hirshfeld tells this climactic discovery of the expanding universe with great verve and sweep, as befits a story whose scope, characters and import leave most fiction far behind." --Wall Street Journal "Starlight Detectives is just the sort of richly veined book I love to read--full of scientific history and discoveries, peopled by real heroes and rogues, and told with absolute authority. Alan Hirshfeld's wide, deep knowledge of astronomy arises not only from the most careful scholarship, but also from the years he's spent at the telescope, posing his own questions to the stars." --DAVA SOBEL, author of A More Perfect Heaven: How Copernicus Revolutionized the Cosmos and Longitude In 1929, Edwin Hubble announced the greatest discovery in the history of astronomy since Galileo first turned a telescope to the heavens. The galaxies, previously believed to float serenely in the void, are in fact hurtling apart at an incredible speed: the universe is expanding. This stunning discovery was the culmination of a decades-long arc of scientific and technical advancement. In its shadow lies an untold, yet equally fascinating, backstory whose cast of characters illuminates the gritty, hard-won nature of scientific progress. The path to a broader mode of cosmic observation was blazed by a cadre of nineteenth-century amateur astronomers and inventors, galvanized by the advent of photography, spectral analysis, and innovative technology to create the entirely new field of astrophysics. From William Bond, who turned his home into a functional observatory, to John and Henry Draper, a father and son team who were trailblazers of astrophotography and spectroscopy, to geniuses of invention such as L on Foucault, and George Hale, who founded the Mount Wilson Observatory, Hirshfeld reveals the incredible stories--and the ambitious dreamers--behind the birth of modern astronomy. Alan Hirshfeld, Professor of Physics at the University of Massachusetts Dartmouth and an Associate of the Harvard College Observatory, is the author of Parallax: The Race to Measure the Cosmos, The Electric Life of Michael Faraday, and Eureka Man: The Life and Legacy of Archimedes.

Alan Hirshfeld, Professor of Physics at the University of Massachusetts Dartmouth and an Associate of the Harvard College Observatory, received his undergraduate degree in astrophysics from Princeton and his Ph.D. in astronomy from Yale. He is the author of Parallax: The Race to Measure the Cosmos, The Electric Life of Michael Faraday, and Eureka Man: The Life and Legacy of Archimedes. He is a regular book reviewer for the Wall Street Journal and has contributed to Sky & Telescope, the American Journal of Physics, BBC History Magazine, and American Scientist. He has made radio and television appearances on NPR, PBS, and C-SPAN and lectures nationwide about science history and discovery.
Loading...
or support indie stores by buying on