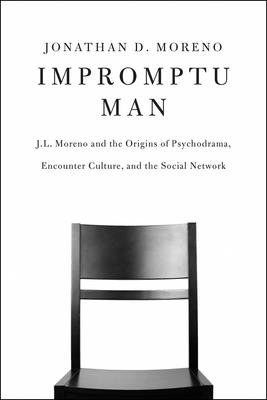 J.L. Moreno and the Origins of Psychodrama, Encounter Culture, and the Social Network

"Impromptu Man captures the remarkable impact of a singular genius, J.L. Moreno, whose creations--the best-known being psychodrama--have shaped our culture in myriad ways, many unrecognized. The record will be set straight for all time by this can't-put-down biography, a tribute by Jonathan D. Moreno to his father's masterly legacy." --DANIEL GOLEMAN, author of Emotional Intelligence: Why It Can Matter More Than IQ J.L. Moreno (1889-1974), the father of psychodrama, was an early critic of Sigmund Freud, wrote landmark works of Viennese expressionism, founded an experimental theater where he discovered Peter Lorre, influenced Martin Buber, and became one of the most important psychiatrists and social scientists of his time. A mystic, theater impresario and inventor in his youth, Moreno immigrated to America in 1926, where he trained famous actors, introduced group therapy, and was a forerunner of humanistic psychology. As a social reformer, he reorganized schools and prisons, and designed New Deal planned communities for workers and farmers. Moreno's methods have been adopted by improvisational theater groups, military organizations, educators, business leaders, and trial lawyers. His studies of social networks laid the groundwork for social media like Twitter and Facebook. Featuring interviews with Clay Shirky, Gloria Steinem, and Werner Erhard, among others, original documentary research, and the author's own perspective growing up as the son of an innovative genius, Impromptu Man is both the study of a great and largely unsung figure of the last century and an epic history, taking readers from the creative chaos of early twentieth-century Vienna to the wired world of Silicon Valley. Jonathan D. Moreno, called the "most interesting bioethicist of our time" by the American Journal of Bioethics, is a professor at the University of Pennsylvania and a Senior Fellow at the Center for American Progress.

Jonathan D. Moreno is a philosopher and historian who has advised many governmental and business groups and served on a presidential transition team. He is the author and editor of numerous seminal books, including Mind Wars: Brain Science and the Military in the 21st Century and The Body Politic: The Battle Over Science in America. Called the "most interesting bioethicist of our time" by the American Journal of Bioethics, Moreno is a professor at the University of Pennsylvania, a member of the UNESCO International Bioethics Committee, a Senior Fellow at the Center for American Progress, and a regular contributor to the Huffington Post and Psychology Today. He divides his time between Philadelphia and Washington, DC.
Loading...
or support indie stores by buying on