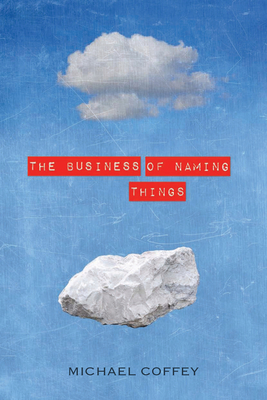 The Business of Naming Things

"Riveting . . . vibrant and unsparing." --Publishers Weekly (starred and boxed review) "Superb. . . . Startlingly original." --Library Journal (starred review) "Once I started reading these stories, I couldn't stop. They absorbed me thoroughly, with their taut narratives and evocative language--the language of a poet." --JAY PARINI, author of Jesus: The Human Face of God and The Last Station "Sherwood Anderson would recognize this world of lonely, longing characters, whose surface lives Coffey tenderly plumbs. These beautiful stories--spare, rich, wise and compelling--go to the heart." --FREDERIC TUTEN, author of Self Portraits: Fictions and Tintin in the New World "Whether Coffey is] writing about a sinning priest or a man who's made a career out of branding or about himself, we can smell Coffey's protagonists and feel their breath on our cheek. Like Chekhov, he must be a notebook writer; how else to explain the strange quirks and the perfect but unaccountable details that animate these intimate portraits?" --EDMUND WHITE, author of Inside a Pearl and A Boy's Own Story Among these eight stories, a fan of writer (and fellow adoptee) Harold Brodkey gains an audience with him at his life's end, two pals take a Joycean sojourn, a man whose business is naming things meets a woman who may not be what she seems, and a father discovers his son is a suspect in an assassination attempt on the president. In each tale, Michael Coffey's exquisite attention to character underlies the brutally honest perspectives of his disenchanted fathers, damaged sons, and orphans left feeling perpetually disconnected. Michael Coffey is the author of three books of poems and 27 Men Out, a book about baseball's perfect games. He also co-edited The Irish in America, a book about Irish immigration to America, which was a companion volume to a PBS documentary series. He divides his time between Manhattan and Bolton Landing, New York. The Business of Naming Things is his first work of fiction.

Michael Coffey received a B.A. in English from the University of Notre Dame and an M.A. from Leeds University in Anglo-Irish Literature. After university, he moved to New York and began a career in publishing. He has authored three books of poems; a book about baseball's perfect games; and co-edited a book about Irish immigration to America, which was a companion volume to the PBS documentary series The Irish in America. The former co-editorial director of Publishers Weekly, he divides his time between Manhattan and Bolton Landing, New York. The Business of Naming Things is his first work of fiction.
Loading...
or support indie stores by buying on