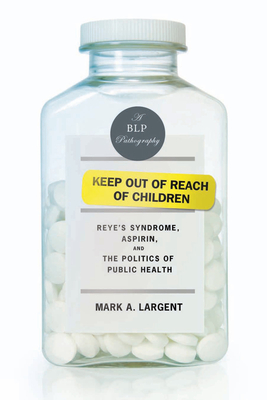 Keep Out of Reach of Children

"A fascinating history of a public health crisis. Compellingly written and insightful, Keep Out of Reach of Children traces the discovery of Reye's syndrome, research into its causes, industry's efforts to avoid warning labels on one suspected cause, aspirin, and the feared disease's sudden disappearance. Largent's empathy is with the myriad children and parents harmed by the disease, while he challenges the triumphalist view that labeling solved the crisis." --ERIK M. CONWAY, coauthor of Merchants of Doubt "Largent's engaging and honest account explores how medical mysteries are shaped by prevailing narratives about venal drug companies, heroic investigators, and Johnny-come-lately politicians." --HELEN EPSTEIN, author of The Invisible Cure "Fascinating. . . . Thought-provoking." --Booklist "Well-researched. . . . A revealing work." --Kirkus Reviews Reye's syndrome, identified in 1963, was a debilitating, rare condition that typically afflicted healthy children just emerging from the flu or other minor illnesses. It began with vomiting, followed by confusion, coma, and in 50 percent of all cases, death. Survivors were often left with permanent liver or brain damage. Desperate, terrorized parents and doctors pursued dramatic, often ineffectual treatments. For over fifteen years, many inconclusive theories were posited as to its causes. The Centers for Disease Control dispatched its Epidemic Intelligence Service to investigate, culminating in a study that suggested a link to aspirin. Congress held hearings at which parents, researchers, and pharmaceutical executives testified. The result was a warning to parents and doctors to avoid pediatric use of aspirin, leading to the widespread substitution of alternative fever and pain reducers. But before a true cause was definitively established, Reye's syndrome simply vanished. A harrowing medical mystery, Keep Out of Reach of Children is the first and only book to chart the history of Reye's syndrome and reveal the confluence of scientific and social forces that determined the public health policy response, for better or for ill. Mark A. Largent, a survivor of Reye's syndrome, is the author of Vaccine: The Debate in Modern America and Breeding Contempt: The History of Coerced Sterilization in the United States. He is a historian of science, Associate Professor in James Madison College at Michigan State University, and Associate Dean in Lyman Briggs College at Michigan State University. He lives in Lansing, Michigan.

Mark A. Largent is the author of Keep Out of Reach of Children: Reye's Syndrome, Aspirin, and the Politics of Public Health; Vaccine: The Debate in Modern America; and Breeding Contempt: The History of Coerced Sterilization in the United States. He is a historian of science, Associate Professor in James Madison College at Michigan State University, and Associate Dean in Lyman Briggs College at Michigan State University. He earned his PhD from the University of Minnesota's Program in the History of Science and Technology and has taught history of science, science policy, and American history classes at Michigan State, Oregon State, and the University of Puget Sound. He lives in Lansing, Michigan.
Loading...
or support indie stores by buying on