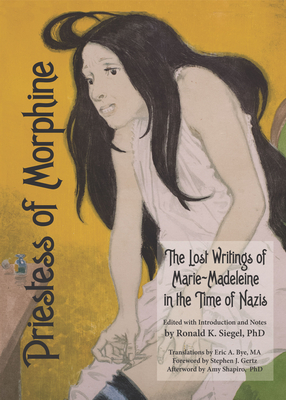 The Lost Writings of Marie-Madeleine in the Time of Nazis

Marie-Madeleine was a German Jew, lesbian poet and novelist whose eroticism and love for morphine was revealed in many of her shocking, sensational, and bestselling books of the early twentieth century. Born Gertrud G nther, and starting at age 15 she wrote over 46 books until 1932 when Nazis condemned her work as degenerate. In 1943 she entered a sanatorium for morphine addiction where she died a mysterious death while under the care of Nazis doctors.

Priestess of Morphine: The Lost Writings of Marie-Madeleine contains many of this fascinating woman's works, translated for the first time into English, and also contains Stephen J. Gertz's Foreword explaining why Marie-Madeleine has become a rediscovered heroine of lesbian and drug literature. Fascinating images from Marie-Madeleine's lost literature and career supplement this volume.

Editor Ronald K. Siegel is known for his classics in drug literature, including Intoxication: Life in Pursuit of Artificial Paradise and Whispers: The Voices of Paranoia.