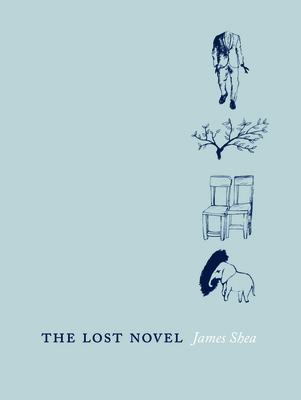 James Shea's first book Star in the Eye won the Fence Modern Poets Series, and garnered widespread acclaim with rave reviews in the Times Literary Supplement, Boston Review, Colorado Review, and the Chicago Sun-Times, which named it a "Favorite Book of the Year" (2008). His follow-up, The Lost Novel, comes on the heels of that praise and the anticipation that's been building since his stunning debut.

"Equal parts deep trouble and heavy pleasure, The Lost Novel is make-up that gets its real on at the ever-breaking mirror we call the world. Lo and behold: James Shea is the James Shea of poetry." --Graham Foust "Though "There's really no dimension / to what we should know," Shea's peripatetic second collection, The Lost Novel, takes us on a mysterious quest, by foot and by car, through rain and through fire, into our restless unknowing, where unreasonable questions that refer to a lost text of spiritual and material imperative--the missing bible of this spare universe--undermine and trouble our impossible pilgrim's progress. How shall we proceed? And how will we know if we have succeeded? These poems are full of subtle longing even as they elegize the unnamable: "What are your names," asks Shea, "I want to report you." "If / there could be / a monument to / the journey we / took it would / have to be grand / and quiet and / shabby and wear- / ing thin of its paint / with another monument / showing through." The Lost Novel is that sadly beautiful monument, and The Lost Novel is that beautifully sad journey. --Robyn Schiff James Shea's first poetry collection, Star in the Eye, was published by Fence Books and included in the Poetry Society of America's New American Poets Series. His poems have appeared in Boston Review, Colorado Review, Denver Quarterly, jubilat, The Iowa Review, and The New Census: An Anthology of Contemporary American Poetry.

James Shea is the author of "Star in the Eye," selected for the 2008 Fence Modern Poets Series and named as a "Favorite Book of 2008" by the Chicago Sun-Times. His work has appeared in various publications, including "Boston Review, Colorado Review, Denver Quarterly, jubilat, The Iowa Review, " and the Academy of American Poets' Poem-A-Day feature. His translations of Japanese poetry can be found in "The Iowa Review, Circumference, " and "Gin'yu." He has taught at the University of Chicago, Columbia College Chicago, DePaul University, and as a poet-in-residence in the Chicago public schools, where he received the Poetry Center of Chicago's Gwendolyn Brooks Award for Excellence in Teaching. He was included recently in the Poetry Society of America's New American Poets series, and his second collection is forthcoming from Fence Books. He currently teaches at Nebraska Wesleyan University.
Loading...
or support indie stores by buying on