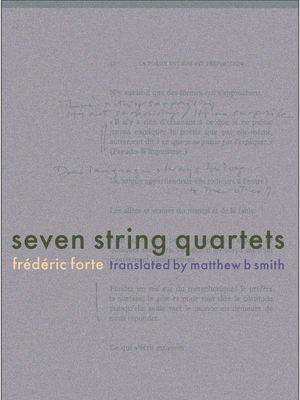 Fr d ric Forte's fleeting poems borrow the structure and arrangement of the string quartet, but rather than performing in concert, these poems keep tuning their instruments, fidgeting and fussing, sighing and shrugging, until they quietly exit the stage. Throughout, one is swept along by what turns out to be a surprisingly subtle, finely nuanced performance.

Fr d ric Forte has published seventeen collections in the past ten years. He became a member of the well-known Oulipo (Workshop of Potential Literature) in 2005, and teaches and does residencies throughout France. He lives in Paris, where (among other things) he runs the blog po te-public.