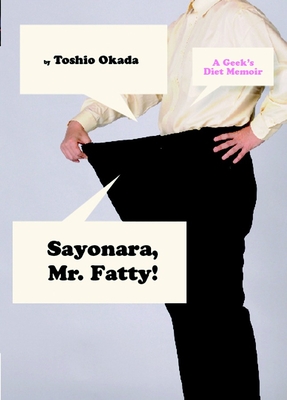 In this uplifting memoir, famous Japanese pop culture "Geek" Toshio Okada tells of the diet and lifestyle changes he made in his fight against obesity, and how his public perception dramatically improved as a result of his healthier appearance.

Toshio Okada lost 110lbs in one year, without the use of funky dieting techniques or exercises, using nothing but a notepad. He recognized that a diet is doomed to fail if it's unsustainable, and a person cannot continue something they do not enjoy. Examining various diets and exercise regimes--even taking surgery into account--he concluded that a recording diet would be the most effective method. By succeeding in the recording diet, a person will learn a means of self-control that can be applied to other aspects of life, such as budgeting. Toshio Okada's diet reflects the six stages of space flight, each stage a little bit closer to the final goal of health and self confidence!

“The diet book of the Obama era… A valuable illustration of otaku-problem solving. The process of building these arguments is a fascinating exercise in otaku-think, erected with risk/reward, cost/benefit analyses.” Ain’t It Cool News
“If you’re at all interested in losing weight, or controlling any part of your life, Sayonara, Mr. Fatty is indispensable. The book is warm and inviting, and treats you with reassurances and life stories from a man who is just like the rest of us.” —Japanator
“The real results, when achieved, are so worth it. In his last chapter, Okada describes it as landing on the moon. When you lose a lot of weight, everything about you changes… If you can achieve this landing on the moon sensation using his methods, this book will be the best fifteen bucks you’ve ever spent.”—Mania.com

Born in 1958, Toshio Okada is a Japanese writer
who specializes in pop culture. Calling himself
"OtaKing"--short for "King of Otaku," or "King of
the Geeks"--he's published more than 10 books,
with such titles as Introduction to Otaku-ology and
International Otaku University. He is the founder
of Gainax Co., Ltd. , serving as CEO from 1984 to
1992. Gainax is known as one of the most influential
anime-producing companies in Japan, due in large
part to the success of its award-winning magnum
anime opus, Neon Genesis Evangelion. Okada has
lectured on pop culture in universities and colleges
around the world, including The University of
Tokyo in 2002 and MIT in 2003.
Loading...
or
Not Currently Available for Direct Purchase