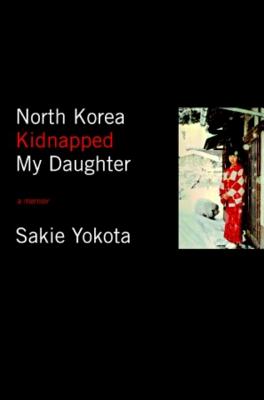 On November 15, 1977, 13 year-old Megumi Yokota disappeared without a trace while on her way home from school. Twenty years later a newspaper revealed she was abducted by North Korean operatives and was still in North Korea. Megumi and at least 13 others were taken from coastal cities in Japan during the 1970s and 80s, shoved into holding cells on spy vessels, and shipped off to North Korea to train agents in Japanese culture and customs. The perpetrators of the Korean Air Flight 858 bombing in 1987 posed as Japanese nationals thanks to such training.

North Korea Kidnapped My Daughter is Sakie Yokota’s memoir of the last 30 years without her daughter. Her resounding faith is inspirational as is her unfaltering determination to repatriate Megumi. Mrs. Yokota vividly recounts the horrifying panic when Megumi went missing and the entire ordeal of her daughter’s absence.

In 2002, North Korea released five of the victims, claiming the other eight were dead; however, it refused to provide legitimate evidence to support these claims. After four years of deliberations in Japan, Sakie Yokota attended the first U.S. Congressional hearing on the abductions and asked America for help.

If alive, Megumi is now 44 years old. Her mother and father have aged, her twin brothers have families of their own, and while they know where Megumi was taken to, she still has not been returned. Mrs. Yokota is strongly opposed to any “de-listing” of North Korea barring the return of the remaining abductees.

“The Yokotas' story has everything: intrigue, suspense, international scandal, betrayal, hope, despair, faith, endurance, redemption.  Most of all, it has the stirring example of a mother's love that unexpectedly brought her to faith and a role on the world stage.” —Philip Yancey


"...a family journal; a journey of continuing hope and faith.  the reading of this modest book is a moving, albeit painful privilege pitting simple folk against impenetrable governments on an international stage where personal loss ultimately reveals an enormous cost to our humanity.  shigeru's photos and sakie yokota's tender unfolding of the events surrounding the kidnapping of their daughter megumi are a testimony to the strength and tenacity of the caring heart."  - Noel Paul Stookey of Peter, Paul and Mary

"The abduction issue may be Japanese-centric but it must be understood in the broader context of an assault on the dignity of the family, everyone's family." —James A. Leach, Former House of Representative Member and chairman of the Subcommittee on Asian and Pacific Affairs, and the Congressional-Executive Commission on China.

"North Korea Kidnapped my Daughter" by Mrs. Sakie Yokota is a deeply moving personal account that reminds us all of the very real human costs of the unresolved historical legacies in East Asia." —L. Gordon Flake, The Maureen and Mike Mansfield Foundation
“This profoundly touching testimony of a mother’s love for her daughter, and her unwillingness to give up the search to find her, should be read by anyone wanting to learn the depths of horror and depravity to which the government of North Korea will sink in its quest to perpetuate its horrific dictatorship. The case of Megumi Yokota cries out for attention.” —Thor Halvorssen, President, Human Rights Foundation

“Mrs. Sakie Yokota’s book of her daughter and their family’s struggle provides intimate descriptions in this extraordinary nightmare of parenthood: an agonizing state of knowing that their child had greatly suffered, while unsure and searching for information of their daughter’s whereabouts and condition. Mrs. Yokota’s strength of character is incredible throughout the book; in her, determination and faith are more powerful than anger.” —Robin H. Sakoda, Armitage International, L.C.

“A heart-rending story of a mother’s love and devotion in confrontation with one of the world’s last totalitarian regime." —Rev. Robert A. Sirico, President, Acton Institute

“This is a heartbreaking story of the ‘loss’ of a Japanese child abducted by North Korea as told through the voice of her mother.  In painstaking detail the mother mines the tiniest memory of her child, her dress, her laugh, her off-hand comments, and of course events of the last time she saw her. It is then the story of the mother’s evolution from a grieving housewife to a pioneer in pulling together Japanese families with similar stories and gradually, within the context of cultural limitations, beginning to exhort the Japanese government to face the North Koreans and bring their daughter and the others home." –Jane Cicala, Former Boeing Executive, Organizer of Diplomatic Circle in Washington D.C.

“North Korea Kidnapped My Daughter by Sakie Yokota is an important contribution. Her search drives home the importance of the universal bonds of a relationship of family, that special relationship between a mother and daughter, and how a country such as North Korea must correct its past mistakes if it plans to move forward and normalize relations with other countries throughout the world.” —Dr. Gerard Janco, President, Eurasia Center/Eurasian Business Coalition

“I welcome this book. I hope it will lead Americans to understand the abductees’ issue and get together to move forward to return all of the victims.” –Jung min Noh, Radio Free Asia

“My meeting with Sakie Yokota remains one of the most moving experiences of my Presidency.”—George W. Bush, 43rd President of the United States

Sakie Yokota was a simple housewife, happily married with a 13-year-old daughter and twin 7-year old sons, when her daughter Megumi mysteriously disappeared in November 1977. Through tireless efforts and relentless faith, she fought to find answers to her daughter's fate, eventually coming up against an international espionage conspiracy involving North Korea
under the leadership of Kim Jongil.

In 1997, her husband Shigeru was designated chairman of the newly founded Association of the Families of Victims Kidnapped by North Korea. The Association supports the victims of North Korea's abductions of Japanese citizens in the late 1970s and early 1980s. In August 2006, Sakie met with President Bush to further talks about demanding sanctions on North
Korea.

Today, Sakie still does not know whether Megumi is alive or not.
Loading...
or
Not Currently Available for Direct Purchase