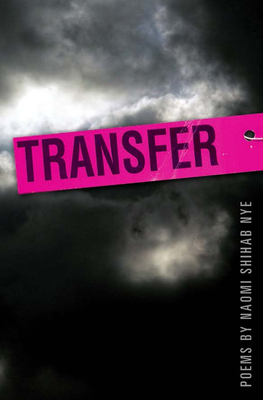 In the current literary scene, one of the most heartening influences is the work of Naomi Shihab Nye. Her poems combine transcendent liveliness and sparkle along with warmth and human insight. She is a champion of the literature of encouragement and heart. Reading her work enhances life.-- William Stafford

where is the name no one answered to

gone off to live by itself

beneath the pine trees separating the houses

without a friend or a bed

without a father to tell it stories

how hard was the path it walked on

all those years belonging to none

of our struggles drifting under

the calendar page elusive as

residue when someone said

how have you been it was

strangely that name that tried

Naomi Shihab Nye has spent thirty-five years traveling the world to lead writing workshops and inspire students of all ages. In her newest collection Transfer she draws on her Palestinian American heritage, the cultural diversity of her home in Texas, and her extensive travel experiences to create a poetry collection that attests to our shared humanity.

"Other Arab-American, Arab, and Islamic poets are of course presenting work concerned with the crucial intersections of faith, politics, culture and war, but what makes Nye very special and worthwhile in this book is her constant focus on her own experience and the personal journey she’s undertaken. Beyond the emphasis on the Middle East, she has a more personal focus on her own father and his journey to America." Coal Hill Review

"Transfer alludes to the life journey we all take" Chron.Com


The metaphor here is transfer: not a destination, but an unsettled state of being. To explore this state in the person of her father, Nye brings in elegy, stories, documents, odes, translations, and history to reveal the forces and mysteries that shape a lifeWhat makes the poems so artful, and go further, is that they engage with what is there as much as what is not.”The Philadelphia Inquirer

Naomi Shihab Nye is the author or editor of more than 25 volumes. She has been a Lannan Fellow, a Guggenheim Fellow, and a Witter Bynner Fellow (Library of Congress). She has received a Lavan Award from the Academy of American Poets, the Isabella Gardner Poetry Award, the Lee Bennett Hopkins Poetry Award, the Paterson Poetry Prize, four Pushcart Prizes, and numerous honors for her children's literature, including two Jane Addams Children's Book Awards. In 2012 she received an Honorable Mention in Poetry from the Arab American National Museum for Transfer. Her collection 19 Varieties of Gazelle was a finalist for the National Book Award. She is a regular columnist for Organica and poetry editor for The Texas Observer. Her work has been presented on National Public Radio on A Prairie Home Companion and The Writer's Almanac. She has been featured on two PBS poetry specials: "The Language of Life with Bill Moyers" and "The United States of Poetry" and also appeared on NOW with Bill Moyers. She has been visiting writer for full semesters for The Michener Center at the University of Texas at Austin and the University of Hawai'i. In January 2010 she was elected to the Board of Chancellors of the Academy of American Poets.
Loading...
or support indie stores by buying on