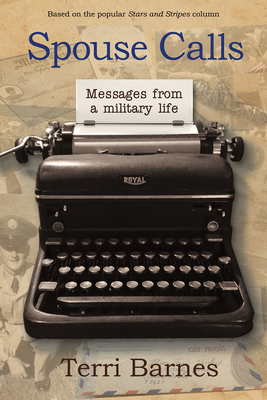 Messages From a Military Life

Based on Terri’s award-winning Stars and Stripes column of the same name, Spouse Calls features a collection of her best essays on a wide range of topics: motherhood, faith, friendship, family ties, war, current events, sacrifice, PTSD, moving, homecomings, and more. As a wife and mom, Terri highlights important, pivotal moments in her own family’s life as well as others’, in essays that resonate with both military and nonmilitary families.

From her own kitchen table to Capitol Hill, Terri takes readers beyond the headlines and homecoming videos for an inside look at the day-to-day hardships, victories, and many ways military life shapes, challenges, and enriches its families.

Through poignant personal stories, incisive interviews, and emotive reflections, she creates an historical snapshot of American and world affairs, preserving an important piece of our nation’s culture.

About her book, Terri says, “My hometown isn’t a geographical location, but a place in American culture that is invisible to many people. My family lives in the hometown of military installations and military communities. This book is the story of the people we know and the life we live in the neighborhood of our American military life.”

Terri’s Stars and Stripes column on which the book is based was also recognized by The National Society of Newspaper Columnists, earning second place in the nation for the best general interest column in a newspaper under 50,000 circulation. NSNC judges commended her for writing “with insight and remarkable sensitivity,” calling her columns “masterful” and “powerful.”

”…Whether you have been married to the military for most of your life, or are just entering military life, you will be consoled and encouraged by the stories in Spouse Calls.” —The Seasoned Spouse


Praise For Spouse Calls: Messages From a Military Life…

“There are times when an author and a book speak directly to your soul. When the author describes in beautiful language every burden and weight that you didn’t even realize you were carrying. When you find yourself nodding at each chapter and saying, ‘Yes! Exactly, that’s how I feel!’ For military spouses, the book Spouse Calls will give you that delightful experience. … Whether you have been married to the military for most of your life, or are just entering military life, you will be consoled and encouraged by the stories in Spouse Calls.” — The Seasoned Spouse

TERRI BARNES is the author of Spouse Calls: Messages From a Military Life, the editor and coauthor of Stories Around the Table: Laughter, Wisdom, and Strength in Military Life, and the special projects editor at Elva Resa Publishing.

A well-respected journalist, Terri developed and wrote the weekly Stars and Stripes column Spouse Calls. Appearing in print editions worldwide and online for more than eight years, the column was honored in 2015 by the National Society of Newspaper Columnists, winning second place nationally. Her book Spouse Calls is a select compilation of those columns.

Terri continues to be a voice for military spouses and families. She has been a member of the Washington, DC, press corps and has contributed to several other books.

Terri’s expertise in military life comes from long experience. Her father was a Vietnam veteran and career military man. Her husband, Mark, retired from the Air Force after thirty years of active duty service. Terri and Mark now reside in Summerville, South Carolina. They have three adult children.