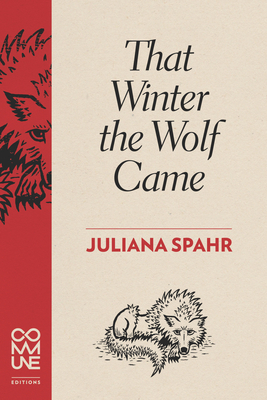 That Winter the Wolf Came

That Winter the Wolf Came is written for this era of global struggle. It finds its ferment at the intersection of ecological and economic catastrophe. Its feminist and celebratory energy is fueled by street protests and their shattered windows. Amid oil spills and austerity measures and shore birds and a child holding its mother's hand and hissing teargas canisters, it reminds us exactly what we must fight to defend with a wild ferocity, and what we're up against.

In her poems, love does not resist the world beyond; love lets it in. Politics demands feeling rather than denuding it. --Los Angeles Review of Books

Geography, economics, ecology, hydrology, local and international history; repetition, flat limited diction, lengthy chant; intersections of incompatible discourses, such as a field biologist's checklist plus memoir, medical record plus ode, incantation plus site report: Spahr draws on these resources and procedures to make poems that feel like bizarre, careful essays, and essays that feel like sad, extended poems. --The Nation

Juliana Spahr is a writer of literature, a literary critic, a shaper of literary communities through editing, and a relentless collaborator. In addition to editing Commune Editions, she edits the book series Chain Links with Jena Osman and the collectively funded Subpress with nineteen other people. With David Buuck she wrote Army of Lovers (City Lights, 2014). She has edited with Stephanie Young A Megaphone: Some Enactments, Some Numbers, and Some Essays about the Continued Usefulness of Crotchless-pants-and-a-machinegun Feminism (Chain Links, 2011), with Joan Retallack Poetry & Pedagogy: the Challenge of the Contemporary (Palgrave, 2006), and with Claudia Rankine American Women Poets
Loading...
or support indie stores by buying on