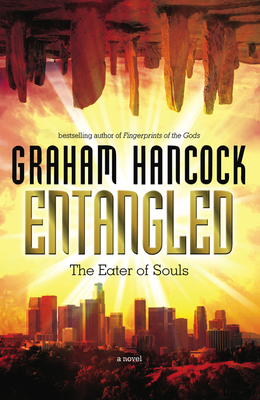 The Eater of Souls

Graham Hancock has spent decades researching and writing some of the most ambitious and successful nonfiction investigations into ancient civilizations and wisdom. Entangled uses all of Hancock's skills and knowledge to propel a fantasy adventure like nothing else preceding it.

Entangled is a timeslip novel alternating between presentday California, Brazil, and prehistoric Spain, with two teenage female protagonists who must come together to avert an incredibly bloodthirsty takeover of the human race.

Entangled is the first book in a trilogy relating the story of an unrelentingly evil master magician named Sulpa who is on the loose and determined to destroy humanity. Leoni, a troubled teen from modernday Los Angeles, and Ria, a young woman who lives in Stone Age Spain, meet in a parallel dimension outside the flow of time to stop Sulpa's spectacular, deadly materialization of the modern world.

Entangled rides a growing wave of interest in parallel dimensions and imaginary worlds (The Lord of the Rings, The Chronicles of Narnia, and The Golden Compass are recent Hollywood examples) and will have immediate appeal to readers of Philip Pullman, Stephen King, Neil Gaiman, and Kate Mosse, among others.

But Entangled has the added merit of being grounded in solid anthropological and scientific research. Hancock calls on his years of research into cuttingedge issues, including the "Neanderthal Enigma," the nature of consciousness, the many worlds interpretation of quantum physics, parallel realms, time travel, and neardeath and out-of-body experiences.


Praise For Entangled: The Eater of Souls…

"Adeptly balancing a concern for harsh and complicated realities with a boundless talent for the fantastical, Hancock, author of popular history works such as the bestseller Fingerprints of the Gods, has created a fantasy realm where an epic struggle is underway.... Hancock's draw on real anthropological and archaeological information is grounding and invigorating, and his supernatural additions are both internally coherent and satisfyingly trippy." - Publishers Weekly

Graham Hancock is the author of the international bestsellers The Sign and The Seal, Fingerprints of the Gods, and Heaven's Mirror. His books have sold more than five million copies.
Loading...
or support indie stores by buying on