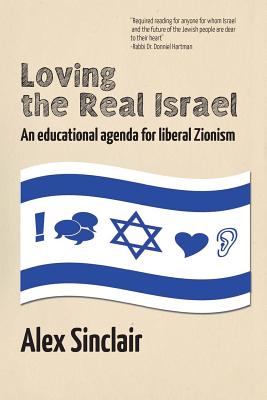 An Educational Agenda for Liberal Zionism

Israel education has been taking on an increasing high profile in the Jewish community. But is it effective? Can old messages speak to a new generation? Or is a new approach called for? LOVING THE REAL ISRAEL draws from the writings of Jewish philosophers, educational theorists, and Bible scholars to offer principles for a new liberal Zionist engagement. LOVING THE REAL ISRAEL provides guidance for educators in constructing meaningful Israel educational experiences, as well as for liberal Zionists who want to discuss Israel issues with their friends, family, and community. About the Author Alex Sinclair is director of programs in Israel Education for the Jewish Theological Seminary. He received his PhD in Jewish Education from the Hebrew University of Jerusalem and has taught at the Hartman Institute, the Schechter Institute, and the Hebrew University of Jerusalem, and served as director of research for MAKOM, the Israel Engagement think tank of the Jewish Agency.
Advance Praise Alex Sinclair brilliantly and critically addresses ones of the central challenges facing the Jewish people today: the relationship between Israel and world Jewry. In arguing for a new Israel engagement agenda founded on the amalgamation of the principles of passion, caring and anger, Alex challenges us to redefine the foundations of the relationship and sets the ground for a possible future free from paternalism, passivity and alienation.
- Rabbi Donniel Hartman, president, Shalom Hartman Institute and director of its iEngage Project An intelligent guide to teaching and communicating to Jewish audiences about Israel in a manner that is loving but frank. An important addition to the discourse on Israel education. I recommend it highly.
- Dr. Donald A. Sylvan, former president of Jewish Education Service of North America Sinclair proposes a bold new agenda for Israel/Zionism education in the Diaspora, an educational vision that calls for a substantive shift in how many Israel educators think and teach. His ideas are well developed and carefully researched, though not without controversy. I encourage all those who care about Israel to read this book.
- Dr. Marc N. Kramer, executive director, RAVSAK: The Jewish Community Day School Network A thought-provoking and timely book.
- Tom Dine, former executive director of the American Israel Public Affairs Committee (AIPAC)