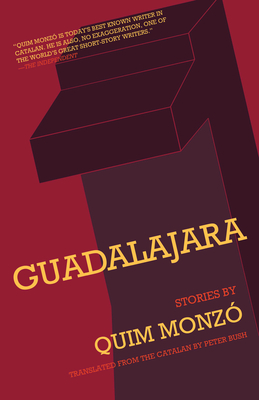 A gifted writer, he draws well on the rich tradition of Spanish surrealism . . . to sustain the lyrical, visionary quality of his imagination.--New York Times

All the heroes of this story collection--the boy who refuses to follow the family tradition of having his ring finger cut off; the man who cannot escape his house, no matter what he tries; Robin Hood stealing so much from the rich that he ruins the rich and makes the poor wealthy; Gregor the cockroach, who wakes one day to discover he has become a human teenager; the prophet who can't remember any of the prophecies that have been revealed to him; Ulysses and his minions trapped in the Trojan horse--are faced with a world that is always changing, where time and space move in circles, where language has become meaningless. Their stories are mazes from which they can't escape.

The simultaneously dark, grotesque, and funny Guadalajara reveals Quim Monz at his acerbic and witty best.

Quim Monz was born in Barcelona in 1952. He has been awarded the National Award, the City of Barcelona Award, the Prudenci Bertrana Award, the El Temps Award, the Lletra d'Or Prize for the best book of the year, and the Catalan Writers' Award; he has been awarded Serra d'Ormagazine's prestigious Critics' Award four times. He has also translated numerous authors into Catalan, including Truman Capote, J.D. Salinger, and Ernest Hemingway.

Peter Bush is a renowned translator from Catalan, French, Spanish, and Portuguese. He was awarded the Valle-Incl n Literary Translation Prize for his translation of Juan Goytisolo's The Marx Family Saga.