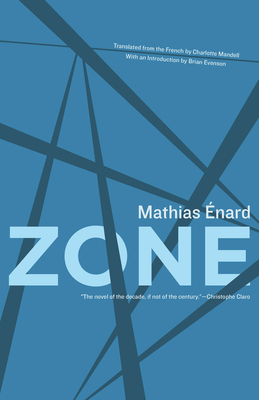 "The novel of the decade, if not of the century."--Christophe Claro

Francis Servain Mirkovic, a French-born Croat who has been working for the French Intelligence Services for fifteen years, is traveling by train from Milan to Rome. He's carrying a briefcase whose contents he's selling to a representative from the Vatican; the briefcase contains a wealth of information about the violent history of the Zone--the lands of the Mediterranean basin, Spain, Algeria, Lebanon, Italy, that have become Mirkovic's specialty.

Over the course of a single night, Mirkovic visits the sites of these tragedies in his memory and recalls the damage that his own participation in that violence--as a soldier fighting for Croatia during the Balkan Wars--has wreaked in his own life. Mirkovic hopes that this night will be his last in the Zone, that this journey will expiate his sins, and that he can disappear with Sashka, the only woman he hasn't abandoned, forever . . .

One of the truly original books of the decade--and written as a single, hypnotic, propulsive, physically irresistible sentence--Mathias nard's Zone provides an extraordinary and panoramic view of the turmoil that has long deviled the shores of the Mediterranean.

Mathias nard has won numerous prizes for his works, including the the Prix du Livre Inter and the Prix D cembre for his novel Zone. He is currently a professor of Arabic at the University of Barcelona.

Charlotte Mandell has translated works from a number of important French authors, including Proust, Flaubert, Genet, Maupassant, and Blanchot, among others. She received a Literary Translation Fellowship from the National Endowment for the Arts for her translation of Enard's Zone. Brian Evenson is a translator from French and the author of ten books of fiction, including The Open Curtain, which was a finalist for an Edgar Award and an IHG Award.