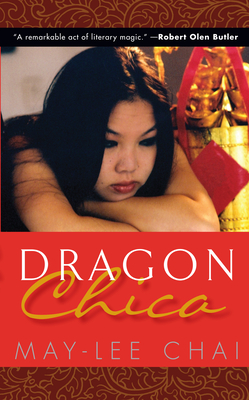 Nea, a Chinese-Cambodian teenager, flees to Texas as a refugee from the Khmer Rouge regime when a miracle occurs. Although her family has been struggling to support itself, they discover that a wealthy aunt and uncle have managed to make it to America as well. Nea and her family rush to join their relatives and help run a Chinese restaurant in Nebraska. But soon Nea discovers their miracle is not what she had expected. Family fights erupt. Then the past - and a forbidden love- threaten to tear them all apart. Dragon Chica follows Nea, an indomitable character in the tradition of Holden Caulfield, Scout Finch and Jo March, as she fights to save her family and herself.

May-lee Chai is the author of five books, including The Girl from Purple Mountain, which was nominated for a National Book Award. She is the recipient of a 2006 NEA Grant in Literature and has an M.A. from Yale in East Asian Studies and a second M.A. in English-Creative Writing from the University of Colorado in Boulder. A former reporter for the Associated Press, she is currently a Chinese translator for PEN American Center.

"In Chai's coming-of-age novel, 11-year-old Nea, who survived the Khmer Rouge with her scrappy mother, beautiful older sister, and younger siblings, leaves Texas for Nebraska to work in the Chinese restaurant owned by her auntie and uncle. But the miracle she'd hoped for is crushed upon arrival: auntie and uncle, once wealthy, are now struggling, and the locals are more bigoted than they were in Texas..." –Publishers Weekly

“It is very rare that a coming of age novel transcends its inherent limitations and attains the complex emotional resonance of adult fiction. Dragon Chica does this with great aplomb. The book explores with subtlety and depth the mature, universal issues of identity and connection, but it also retains its direct appeal to younger readers. May-lee Chai has performed a remarkable act of literary magic.” –Robert Olen Butler, Pulitzer-Prize-winning author of A Good Scent from a Strange Mountain