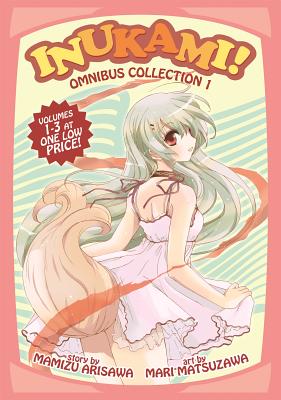 Inukami: a sacred being with a dog-like appearance that forges a contract with a powerful human tamer to help him eliminate evil monsters and demons.

Teenage slacker Keita Kawahira Keita is the descendant of a long line of Inukami-tamers, but seems to lack the necessary ability and has been therfore been forsaken by his family. One day, he meets a cute Inukami named Yoko, who, at first glance, looks graceful, obedient, and beautiful...but after forging a contract with her, Keita discovers that Yoko is a wild and mischievious Inukami that no one has ever been able to control.

Keita and Yoko travel Japan selling their services as demon exterminators, fighting insane threats like panty-stealing ghosts, drunken genies, and obsessed otaku, but mostly fighting each other. While Keita tries desperately to tame Yoko, the rest of the Kawahira clan intervenes, sending a squad of Inukami to whip Yoko into shape, with explosive results!

Mamizu Arisawa is a Japanese novelist who is best known for Inukami!  Inukami! originated as a light novel, with thirteen volumes currently published in Japan.