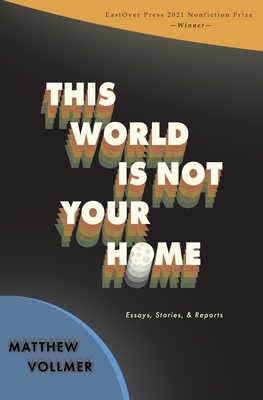 This World is Not Your Home

The title essay tells the story of Vollmer's growing up in rural North Carolina, and catalogs the psychological pressures exerted by a religion that, while all-consuming for the author, seemed invisible to the rest of the world.

Written using a variety of forms and points of view, these immersive, voice-driven essays are a testament to the dexterity of the form:

- An essay in the form of instructions for how to write a love story centers on two young star-crossed lovers at a Seventh-day Adventist boarding school.

- A story of a trip to a mountain home built to resemble a castle reveals a secret underground bunker that houses tens of thousands of dollars' worth of Nazi militaria.

- An essay written in the form of notes takes stock of forbidden music.

- At the story of a husband and wife who take a walk after dark, encounter a spectacular cosmic phenomenon, and return home to discover a distraught child.

- An investigation into NASA's Symphonies of the Planets, an album of electromagnetic impulses emitted by various planets, which was transformed into sound waves, occasions an extended meditation on space, music, and the meaning of sound.

- An eyewitness account of the aftermath of the shooting at Virginia Tech considers the surreal and sorrowful reactions to an unfathomable violence.

- In another essay, a preoccupation with his inevitable death causes Vollmer to imagine who his wife might remarry, and the cataloguing of his potential replacement's superior characteristics and preoccupations creates a kind of portrait in reverse.

- An essay that unfolds in a single paragraph recounts the house of Vollmer's best friend, which has since been razed, and becomes a requiem for the loss of a childhood filled with Nerf footballs, a farting dog, Intelevision track pads, and an obsession with finding hidden messages in rock music.

- A retelling of a trip with his family to visit his parents in their mountain home over Thanksgiving becomes an occasion to grieve a recent miscarriage, while dramatizing peculiar family dynamics and bearing witness to the beginning stages of a mother's early onset dementia.