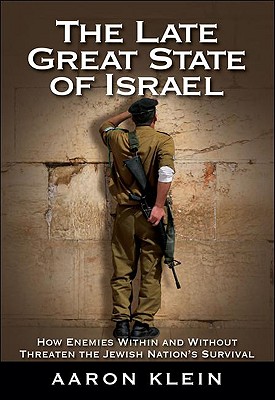 The Late Great State of Israel

How Enemies Within and Without Threaten the Jewish Nation's Survival

In The Late Great State of Israel, Aaron Klein, author of the critically acclaimed Schmoozing with Terrorists, draws upon years of experience living and working as a journalist based in Israel. His book is an urgent, clarion call to supporters of Israel around the world: The great Mideast democracy faces catastrophe. Klein shows how Israel is often its own worst enemy, and how Hamas, Hezbollah, Iran, and a variety of Palestinian terrorists threaten to end the Zionist dream once and for all. He also exposes the important role that America and the news media have played in putting the Jewish nation in such a dangerous position.Israel is in the fight of its life, facing perils from inside and outside its borders. Unless these perils are countered soon, warns Klein, the only remnant of the Jewish nation may be an epitaph: The Late Great State of Israel.

Aaron Klein is a New York Times bestselling author and veteran journalist. He is the Jerusalem bureau chief for WND and hosts the #1-rated local weekend radio show, Aaron Klein Investigative Radio. His previous books include Fool Me Twice, Impeachable Offenses, Red Army, The Manchurian President, The Late Great State of Israel, and Schmoozing with Terrorists.