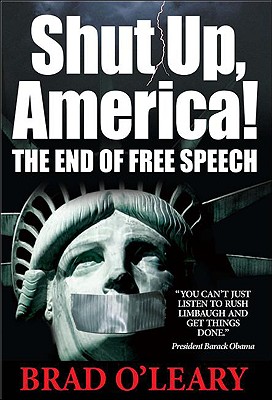 The End of Free Speech

Can you be trusted with free speech? Many politicians in Washington don't think so. They see your right to free speech as a threat to their seat in power. In this hard-hitting book, bestselling author Brad O'Leary exposes the frightening movement afoot that would eviscerate the First Amendment. With his trademark, take-no-prisoners approach, O'Leary shows you how censorship is on the march. From the Orwellian Fairness Doctrine to so-called campaign finance reform, you will learn the real threats, who the enemies of Ben Franklin and Thomas Paine are (including names of senators, congressmen, and Obama administration officials), what they're up to, and how you can fight back and save your freedom. Over two decades ago, Ronald Reagan gave birth to a flourishing, free exchange of ideas when his Federal Communications Commission removed the shackles of the misnamed Fairness Doctrine and restored the First Amendment. However, what was a boon to honest debate has proven to be a nightmare for left-wing politicians. Now these censorship proponents have the upper hand and the First Amendment in their sights.

Mr. O'Leary is former President of the American Association of Political Consultants. He is the author of 11 books, including Presidential Follies, Triangle of Death, and Are You a Conservative or a Liberal?
Loading...
or
Not Currently Available for Direct Purchase