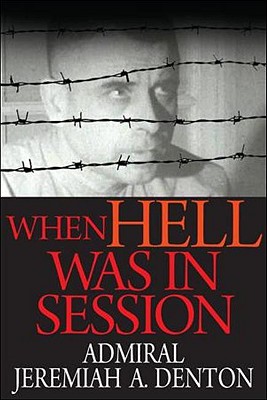 When Hell was in Session

In When Hell Was in Session, Jeremiah Denton, the senior American officer to serve as a Vietnam POW, tells the amazing story of the almost eight years he survived as a POW in North Vietnam. In 1966, he appeared on a television interview from prison and blinked the word torture in Morse Code, confirming for the world that atrocities were taking place in the Hanoi Hilton. And while in prison, he acted as the senior officer and looked after the morale of his troops at great risk to himself. After his release in 1973, Denton was promoted to rear admiral and in 1980 won election to the United States Senate where he worked with President Reagan to fight communism in Latin America. This new and updated edition of this classic book provides new insights into Denton's years in the Senate where he was a key leader in promoting the Reagan Revolution.

On July 18, 1965, Jeremiah Denton was shot down near Thanh Hoa. He spent almost eight years in North Vietnamese POW camps. During a 1966 television interview arranged by the North Vietnamese, Denton blinked in Morse Code, spelling out T-O-R-T-U-R-E with his eyes: the first confirmation Americans in Vietnam faced torture.Denton won election to the U.S. Senate in 1980.
Loading...
or support indie stores by buying on
(This book is on backorder)