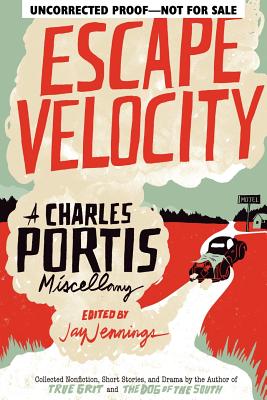 For those who care about literature or simply love a good laugh (or both), Charles Portis has long been one of America's most admired novelists. His 1968 novel True Grit is fixed in the contemporary canon, and four more have been hailed as comic masterpieces. Now, for the first time, his other writings--journalism, travel stories, short fiction, memoir, and even a play--have been brought together in Escape Velocity: A Charles Portis Miscellany, his first new book in more than twenty years. All the familiar Portis elements are here: picaresque adventures, deadpan humor, an expert eye for detail and keen ear for the spoken word, and encounters with oddball characters both real and imagined. The collection encompasses the breadth of his fifty-year writing career, from his gripping reportage of the civil rights movement for the New York Herald Tribune to a comic short story about the demise of journalism in the 21st century. New to even the most ardent fan is his three-act play, Delray's New Moon, performed onstage in 1996 and published here for the first time. Whether this is your first encounter with the world of Portis or a long-awaited return to it, you'll agree with critic Ron Rosenbaum--whose essay appears here alongside tributes by other writers--that Portis "will come to be regarded as the author of classics on the order of a twentieth-century Mark Twain, a writer who captures the soul of America."

Jay Jennings lives in his hometown of Little Rock, Arkansas, where he is a freelance writer. His work appears regularly in the New York Times Book Review, and his writing has been recognized by the Best American Sports Writing annual and has been included in the humor anthologies Mirth of a Nation and The Lowbrow Reader Reader. His book Carry the Rock: Race, Football, and the Soul of an American City was named a 2010 Okra Pick by the Southern Independent Booksellers Alliance.
Loading...
or
Not Currently Available for Direct Purchase