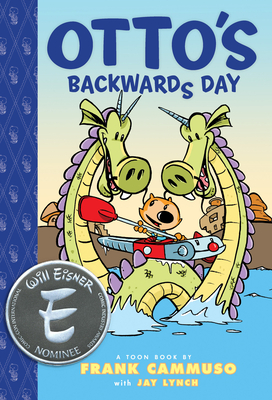 Someone stole Otto's birthday To get his presents back, Otto needs to solve a slew of puzzles--but his greatest challenge comes at his journey's end. Kirkus Reviews declares this book a snappy follow-up to Otto's Orange Day.

Frank Cammuso, who wrote and drew Otto's adventure, is the author of the graphic novel series Knights of the Lunch Table, a middle school version of King Arthur and his knights. His forthcoming series is The Misadventures of Salem Hyde. His writing has appeared in The New Yorker, The New York Times, The Village Voice and Slate. Jay Lynch, also a cartoonist, has helped create some of Topps Chewing Gum's most popular humor products, such as Wacky Packages and Garbage Pail Kids. Frank and Jay collaborated on the original TOON Book Otto's Orange Day, which School Library Journal named a Best New Book and described as a page-turner that beginning readers will likely wear out from dangerously high levels of enjoyment.
Loading...
or support indie stores by buying on