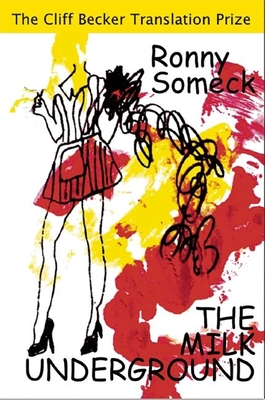 The Milk Underground possesses the clarity we associate with the films that shape our lives. He is the auteur of angst, the director of a cast of characters destined to haunt our dreams, the one who knows best how to frame his, and our, experience. Someck is one of the most inventive poets around.--Christopher Merrill, Necessites

In poetic language that is both conversational and lyrical, Inbar and Manaster masterfully and seamlessly translate Someck's wide-ranging, horrified and loving vision.--Aliki Barnstone

Ronny Someck was born in Baghdad in 1951 and came to Israel as a young child. His work has been translated into forty-one languages.

Ronnie Someck: Ronny Someck was born in Baghdad in 1951 and came to Israel as a young child. He has worked with street gangs, and currently teaches literature and leads creative writing workshops. He has published 11 volumes of poetry. His work has been translated into 41 languages.

Hana Inbar: Hana Inbar is a native of Israeli and the daughter of Yossel Birstein, a noted Israeli writer. She and Robert have also co-translated a book of Yossel s flash fiction stories, And So is the Bus, Jerusalem Stories to appear in 2015.

Robert Manaster: Robert Manaster is a poet as well as co-translator. His own poems have appeared in many journals including Rosebud, Spillway, Image, International Poetry Review, and The Literary Review. Currently he is an Assistant Editor for Fifth Wednesday Journal. "
Loading...
or support indie stores by buying on