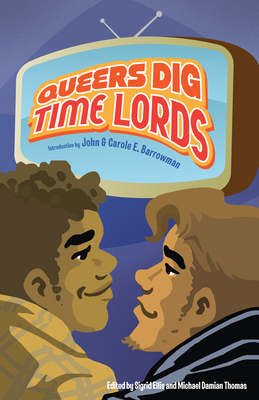 In Queers Dig Time Lords, editors Sigrid Ellis (Chicks Dig Comics) and Michael Damian Thomas (Apex Magazine) bring together essays by award-winning writers to celebrate the phenomenon that is Doctor Who, in the tradition of the Hugo Award-winning Chicks Dig Time Lords. Tanya Huff (Blood Ties) wears her bi-focals as she analyzes the Doctor's fluid sexuality, former Doctor Who script editor Gary Russell explores the show's effect on his teenage years, Paul Magrs (Doctor Who: Hornets' Nest) defends and celebrates the camp qualities of the series, and Melissa Scott (Trouble and Her Friends) describes Doctor Who's impact on her greatest love and loss. Other contributors include David Llewellyn (Doctor Who: Night of the Humans), Rachel Swirsky (Through the Drowsy Dark), Hal Duncan (Ink: The Book of All Hours), Nigel Fairs (Big Finish Productions), Amal El-Mohtar (The Honey Month), Brit Mandelo (Beyond Binary), Mary Anne Mohanraj (Bodies in Motion), and Jed Hartman (Strange Horizons). This book features an introduction by John Barrowman (star of Doctor Who and Torchwood) and Carole E Barrowman (Hollow Earth, Torchwood: Exodus Code). The cover art is by Colleen Coover (Small Favors).

John Barrowman plays Captain Jack in Doctor Who and in Torchwood. He's a Sony recording artist and has performed in numerous TV shows in the US and the UK. He has collaborated with his sister, Carole E Barrowman, on many projects, including John's autobiographies Anything Goes and I Am What I Am (2008, 2009), a comic, Captain Jack and The Selkie (2009), a fantasy novel Hollow Earth (2012) and a Torchwood novel, Exodus Code (2012). Sigrid Ellis is a writer of fiction, nonfiction, and comics; an editor; a parent of two homeschooled children; and an air traffic controller. She is best known as the co-editor (with Lynne M. Thomas) of Chicks Dig Comics: A Celebration of Comic Books by the Women Who Love Them (Mad Norwegian Press, 2012). Her work can be found in the online speculative fiction magazine Strange Horizons and in Whedonistas: A Celebration of the World of Joss Whedon by the Women Who Love Them. Michael Damian Thomas is a writer, editor, and the managing editor of the Hugo Award-nominated Apex Magazine. He has been an associate editor on numerous books for Mad Norwegian Press, including the Hugo Award-winning Chicks Dig Time Lords: A Celebration of Doctor Who by the Women Who Love It (edited by Lynne M. Thomas and Tara O'Shea). Born in Halifax, NS, raised (mostly) in Kingston ON, Tanya Huff lives in rural Ontario, with her wife Fiona Patton, nine cats, and two dogs. Her 27 novels and 72 short stories include horror, heroic fantasy, urban fantasy, comedy, and space opera. Her Blood series was turned into the 22 episode Blood Ties, and writing episode nine allowed her to finally use her degree in Radio & Television Arts. Paul Magrs has published many novels, including the six-volume Spooky Mystery series about Brenda and Effie, and two about the adventures of that time-travelling adventuress, Iris Wildthyme. He published his first novel in 1996, the year he gained his PhD, which was written about the novelist Angela Carter. His first Doctor Who novel was The Scarlet Empress (1998). In recent years he has also written, for AudioGo, seventeen Doctor Who audio dramas starring Tom Baker as the Doctor.
Loading...
or
Not Currently Available for Direct Purchase