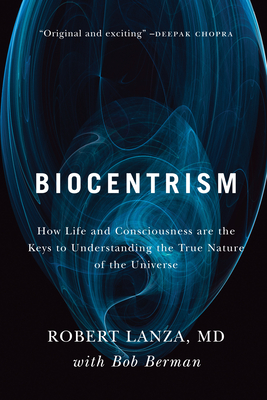 Robert Lanza is one of the most respected scientists in the world--a US News & World Report cover story called him a "genius" and a "renegade thinker," even likening him to Einstein. Lanza has teamed with Bob Berman, the most widely read astronomer in the world, to produce Biocentrism, a revolutionary new view of the universe. Every now and then a simple yet radical idea shakes the very foundations of knowledge. The startling discovery that the world was not flat challenged and ultimately changed the way people perceived themselves and their relationship with the world. For most humans of the 15th century, the notion of Earth as ball of rock was nonsense. The whole of Western, natural philosophy is undergoing a sea change again, increasingly being forced upon us by the experimental findings of quantum theory, and at the same time, towards doubt and uncertainty in the physical explanations of the universe's genesis and structure. Biocentrism completes this shift in worldview, turning the planet upside down again with the revolutionary view that life creates the universe instead of the other way around. In this paradigm, life is not an accidental byproduct of the laws of physics. Biocentrism takes the reader on a seemingly improbable but ultimately inescapable journey through a foreign universe--our own--from the viewpoints of an acclaimed biologist and a leading astronomer. Switching perspective from physics to biology unlocks the cages in which Western science has unwittingly managed to confine itself. Biocentrism will shatter the reader's ideas of life--time and space, and even death. At the same time it will release us from the dull worldview of life being merely the activity of an admixture of carbon and a few other elements; it suggests the exhilarating possibility that life is fundamentally immortal. The 21st century is predicted to be the Century of Biology, a shift from the previous century dominated by physics. It seems fitting, then, to begin the century by turning the universe outside-in and unifying the foundations of science with a simple idea discovered by one of the leading life-scientists of our age. Biocentrism awakens in readers a new sense of possibility, and is full of so many shocking new perspectives that the reader will never see reality the same way again.

Robert Lanza "Robert Lanza was taken under the wing of scientific giants such as psychologist B.F. Skinner, immunologist Jonas Salk, and heart transplant pioneer Christiaan Barnard. His mentors described him as a 'genius, ' a 'renegade thinker, ' even likening him to Einstein himself." --US News & World Report cover story Robert Lanza has been exploring the frontiers of science for more than four decades, and is considered one of the leading scientists in the world. He is currently Chief Scientific Officer at Advanced Cell Technology, and Adjunct Professor at Wake Forest University School of Medicine. He has several hundred publications and inventions, and 20 scientific books, among them, Principles of Tissue Engineering, which is recognized as the definitive reference in the field. Others include One World: The Health & Survival of the Human Species in the 21st Century (with a foreword by President Jimmy Carter), and the Handbook of Stem Cells and Essentials of Stem Cell Biology, which are considered the definitive references in stem cell research. Dr. Lanza received his B.A. and M.D. degrees from the University of Pennsylvania, where he was both a University Scholar and Benjamin Franklin Scholar. He was also a Fulbright Scholar, and was part of the team that cloned the world's first human embryo, as well as the first to clone an endangered species, to demonstrate that nuclear transfer could reverse the aging process, and to generate stem cells using a method that does not require the destruction of human embryos. Dr. Lanza was awarded the 2005 Rave Award for Medicine by Wired magazine, and received the 2006 "All Star" Award for Biotechnology by Mass High Tech. Dr. Lanza and his research have been featured in almost every media outlet in the world, including all the major television networks, CNN, Time, Newsweek, People magazine, as well as the front pages of the New York Times, Wall Street Journal, Washington Post, Los Angeles Times, and USA Today, among others. Lanza has worked with some of the greatest thinkers of our time, including Nobel Laureates Gerald Edelman and Rodney Porter. Lanza worked closely with B.F. Skinner at Harvard University. Lanza and Skinner (the "Father of Modern Behaviorism") published a number of scientific papers together. He has also worked with Jonas Salk (discoverer of the polio vaccine) and heart transplant pioneer Christiaan Barnard. Bob Berman "this is a fascinating guy" --David Letterman "fasten your seatbelts and hold on tight" --Astronomy magazine Bob Berman is the most widely read astronomer in the world. Author of more than one thousand published articles, in publications such as Discover and Astronomy magazine, where he is a monthly columnist, he is also astronomy editor of The Old Farmer's Almanac and the author of four books. He is adjunct professor of astronomy at Marymount College, and writes and produces a weekly show on Northeast Public Radio, aired during NPR's Weekend Edition.
or support indie stores by buying on
Copyright © 2020 American Booksellers Association